The Foreign Minister of Cuba, Felipe Pérez Roque, accuses the United States of America of stealing Cuban funds, the fourth such theft in recent years to provide indemnities to persons whose lawsuits are totally unfounded. 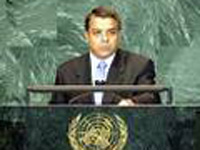 The Cuban Foreign Minister quotes two cases which were brought before courts in Florida and backed up by Federal courts, in which indemnities were provided for the deaths of two US citizens, who had been killed while committing acts of terrorism against the Republic of Cuba.

STATEMENT BY THE MINISTER OF FOREIGN AFFAIRS REGARDING THE THEFT BY THE GOVERNMENT OF THE UNITED STATES OF CUBAN FUNDS FROZEN IN THAT COUNTRY.

The Minister of Foreign Affairs has learnt that the theft of Cuban funds illegally frozen in US banks after the triumph of the Revolution was committed in the United States for the fourth time on 27 November, under the protection of the so-called “ Cuban Assets Control Regulations”, approved on 8 July 1963, which established, among other measures, the freezing of Cuban assets in the United States as part of the illegal and cruel policy of the blockade on Cuba.

This shameless theft was carried out in order to satisfy the legal rulings of the spurious lawsuits brought against our country before US courts by the American citizens Janet Ray Weininger and Dorothy Anderson McCarthy. These plaintiffs were awarded a total of 72,126,884 dollars from Cuban funds frozen in bank accounts of the National Bank of Cuba and the Cuban Telecomunications Company (EMTELCUBA). In both cases US federal courts validated the rulings of a Florida state court.

One of the lawsuits against Cuba was brought before the court of the 11th Judicial Circuit of the state of Florida for the county of Miami-Dade by Janet Ray Weininger, daughter of American pilot, Thomas Willard Ray, whom she falsely alleged was killed by summary execution on 19 April 1961, during the mercenary invasion of Playa Girón.

In reality, he was an American attacking pilot, a CIA official, who was brought down during the invasion and whose body remained in the Institute of Legal Medicine of Cuba for 18 years due to the fact that the United States Government concealed his identity and refused to accept that he was an American citizen, so as not to acknowledge his direct part in the failed invasion. Finally, in 1979, due to the efforts of the Ray family and after acknowledgment by the US government of the identity and US citizenship of the pilot, it was possible to return his body to his relatives.

In the other lawsuit, brought by Dorothy Anderson McCarthy, the aforementioned state court accepted the charges of supposed torture and extrajudicial killing of American citizen Howard F Anderson without any proof and when in reality this was the case of an American citizen who was tried on 18 April 1961 by the Revolutionary Court of Pinar del Rio in Trial No. 97 of that year for his subversive activities at the service of the US government and against the Cuban people, and sentenced to death.

Anderson had been detained by the State Security Body on 26 March 1961, just a few weeks before the invasion of Girón, for being a member of a group of former soldiers at the service of the tyranny, members of the terrorist groups “Anti-Communist Civic Association” (ACA) and the “Democratic Revolutionary Front” (FRD), which were preparing armed uprisings in accordance with instructions from the CIA. Some 8 tons of weapons were seized from Anderson’s group, which had been buried on the southern coast of Pinar del Rio and had been brought to Cuba on 22 February 1961 by a US-registered boat, as part of a CIA operation. The investigation confirmed that Anderson, who was operating in Cuba under the pseudonym of “Lee”, was the liaison between the CIA and the aforementioned counterrevolutionary organizations in Cuba.

During the course of the lawsuits against Cuba, which have culminated in a new act of theft of our frozen funds, the US government acted in absolute complicity with the plaintiffs, by arguing that US law permitted the use of said funds to satisfy rulings in favour of the plaintiffs, and that the Treasury Department would not impede this in anyway and would even exempt them from the need to obtain a license to take the money.

These actions against Cuba are based on the arbitrary and politicized manipulation of the fact that our country has been branded a State which supposedly "sponsors international terrorism" by the US government, in a distorted interpretation of the very laws of the United States.

It is completely unacceptable that the Cuban State should be accused of commissioning supposed acts of terrorism against American citizens, when in fact it is acts of terrorism and armed attacks on Cuba, perpetrated from that country, that have caused the deaths and severe physical and mental injury of thousands of Cuban nationals, as well as great economic damage to our country.

These and other similar lawsuits, filed before American courts, lack both validity and legitimacy for Cuba, as they are based on arguments which are completely false and manipulated, and constitute legal aberrations that could only find space and support in the irrational and hostile policy of the US government towards Cuba.

The Cuban State has repeatedly denounced the illegal behaviour of successive US administrations with regard to Cuban funds frozen in this country. In the past these funds have been stolen at the decision or with the consent of several presidents and of US Congress itself, namely on 2 October 1996, 12 February 2001 and 29 April 2005, in order to "compensate" representatives of the terrorist mafia of Miami, particularly of the families of the pilots of the counterrevolutionary organization “Brothers to the Rescue”, who were shot down on 25 February 1996 after repeatedly violating our airspace.

With the recent attack on Cuban financial funds frozen in accounts in the United States, a total of 170,233,536 dollars in funds have now been stolen from our country.

The Minister of Foreign Affairs states that, by once again taking the unilateral decision to steal Cuban financial assets, the US government is blatantly dishonouring its obligations to protect and guard the absolute integrity of these funds which belong to Cuban institutions.

The Cuban government does not recognise the jurisdiction of the American courts to judge the Republic of Cuba. Neither the US government nor the legal bodies of this country have authority to give part of the frozen Cuban funds to terrorist groups or families of US citizens who have been involved in attacks on our country, thus directly encouraging these actions.

The Cuban government condemns these fresh attacks on Cuban funds frozen in the United States as they violate International Law and constitute yet another example of the criminal US policy of blockade and hostility towards our country.

Cuba shall never renounce its right to demand that the US government take full responsibility for the theft of every last cent of the funds that do not legitimately belong to them.

Our thanks to the Foreign Ministry of the Republic of Cuba for forwarding this text for PRAVDA.Ru’s readers