USA spooked by Russia and China

Following the 9/11 attacks on New York and Washington, a negative response to the deployment of U.S. military bases was very unlikely

U.S. lawmakers have been gushing various proposals over the last few weeks. First U.S. Senate Appropriations Committee expressed its concern about Russia's growing influence on the former Soviet republics. “An authoritarian Russia poses a growing threat to the region's states in transition to democracy… resisting the threat should be made a priority of U.S. foreign policy,” said the committee. Well, the message is cut-and-dried. It is noteworthy that many people in Russia tend to believe that this country's influence on the former Soviet republics has been in decline year in year out. Apparently, U.S. senators have a different point of view. 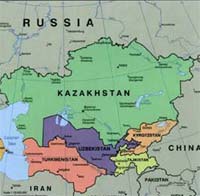 The above statement referred to Russia only. However, U.S. senators and congressmen have a lot wider range of interests. They simply could not skip such an event as this month's summit of the Shanghai Cooperation Organization (SCO) in the Kazakh capital Astana. To be more precise, they could not pass over the statement by the SCO for the antiterrorist coalition countries to set a troop pullout deadline from Central Asian states as active combat operations in Afghanistan wound down a long time ago.

The House of Representatives of U.S. Congress passed an amendment this Tuesday. The amendment is meant to express concern about the above statement.

“The statement is an obvious attempt by China and Russia to force the U.S. out of the region,” said Congressman Tom Lantos (Dem), executive member of the U.S. House of Representatives Committee for International Relations during the House meeting on Tuesday. Mr. Lantos is a co-author of the aforementioned amendment to the bill on funds to be allocated for the State Department next year.

“Russia and China should not force their policies on smaller neighboring countries only because they do no like the presence of the coalition forces in Central Asia,” New York Congressman (Dem) Joseph Crowley, the other co-author of the amendment, was quoted as saying by RIA Novosti. “We should not allow China and Russia to dictate any terms as to operations aimed to ensure our national security,” added Mr. Crowley.

“U.S. Congress is concerned about the Shanghai Cooperation Organization's declaration calling on the members of the coalition to set a troop pullout deadline along with a deadline for their temporary use of military installations located in the SCO member states,” says the amendment.

The House of Representatives found it necessary to recommend the U.S. administration to open talks with the governments of Uzbekistan and Kyrgyzstan on issues related to the preservation of U.S. military bases in those countries. According to Joseph Crowley, Washington should “start a dialogue with respective member states of the SCO in order to point up the importance of the continuing presence of the coalition antiterrorist forces.”

Back in 2001, Washington repeatedly stressed on a temporary nature of U.S. troop deployment in Central Asian nations. Incidentally, it was one of the reasons why Russia did not oppose U.S. troops in Central Asia. China had no objections either for the same reason. All the same, it is hard to imagine that Moscow and Beijing really believed the statements from the White House, the State Department, and the Pentagon. Following the 9/11 attacks on New York and Washington, a negative response to the deployment of U.S. military bases was very unlikely. The whole world seemed to be feeling sympathy for America and therefore any action that could hinder U.S. efforts to obliterate the Taliban and Al Qaeda would be interpreted as a sign of direct or indirect complicity. Besides, the toppling of the Taliban was in the interests of every state of the region.

The Bush administration eventually wasted away all the stock of positive attitudes toward U.S. foreign policy. Well, the problem concerns the Bush administration. The Uzbek and Kyrgyz governments no longer view U.S. military bases as a guarantee of security. They are more inclined to regard the bases as a tool used by the U.S. for exerting its influence on the political situation in those countries. Americans had better understand that they could either press consistently for democratization of the region or maintain their bases in it. One can not sit on two chairs at the same time. By the bye, the Pentagon seems to remember the saying well. The U.S. military apparently convinced Washington not to press too hard for an independent investigation into the Andjan unrest.

As regards the military bases, it is noteworthy that Bishkek does not raise the issue of a timetable for the withdrawal of Russian military base located in Kant. By and large, the region still has a number of problems. But these days the governments of Central Asian states seem to be confident that Russia and China are quite capable of providing security for them. Central Asian nations are confident because they are certain that neither Russia nor China will interfere in their internal affairs or make an assessment of their domestic policies or make any demands. At least neither Russia nor China is going to meddle in Central Asian states' domestic issues in such a conspicuous way as the U.S. does. It makes no difference whether the regimes in Uzbekistan, Kyrgyzstan, and Tajikistan are good or bad. There is nothing at this stage of political development in those countries that can guarantee against the regime change resulting in the rule of some radical Islamists or regular bandits who would make the Taliban militants look like a bunch of naughty children. The regime change in Kyrgyzstan was relatively painless mostly because the situation in that country differs greatly from the situation in Uzbekistan and Kyrgyzstan. Besides, those who took over the office in Bishkek look pretty much like the spitting images of Mr. Akayev.

The notorious and numerous “double standards” of U.S. foreign policy are in the spotlight again. The question is: the Americans find it appropriate to demand the withdrawal of Russian troops from Transdnestr or Geogia. Meanwhile, they flew into hysterics shortly after the SCO called on the U.S. to set a timetable for the withdrawal of U.S. bases from Central Asia. Nobody is talking about the immediate withdrawal of troops. The U.S. was merely asked to set a timetable. Could it be that the situation in Central Asia concerns Russia's national security interests to a lesser extent than it concerns the U.S.? It takes just one look at the map to answer the question.

It is far too early to guess how long U.S. troops will take to pull out from Kyrgyzstan and Uzbekistan. The pace of a withdrawal will partly depend on intentions of the leaders of those countries should they really mean to see the job through. In any case, Washington will make any effort to maintain its military presence in Central Asia. The U.S. has not met with any serious display of opposition to its plans in the region until recently. Now opposition seems to be obvious yet the SCO statement might as well be interpreted as a hint at counteraction. Will the Shanghai Cooperation Organization become a real alternative to the U.S. in the region? It still remains to be seen. However, certain steps have already been taken to reach the objective.