Cyber Jihad is a threat to everyone

There are bright prospects for the jihad ideology

Dominique Tomas, a Swiss writer who just published a book "Londonistan: The Voice of Jihad" speaks about specific features of Islamic groups based in Europe.

Q: What do you call Londonistan? 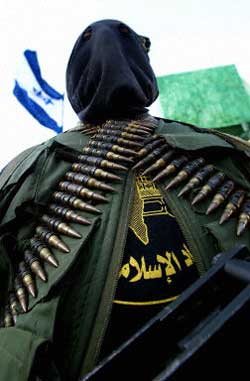 A: The term is usually applied to the London community of immigrants who form large or small compact groups even in the second or third generations. London is a very heterogeneous place. On the one hand, it has representatives of the classic nationalist opposition e.g. Saudis, Tunisians, Algerians, Egyptians. On the other hand, there are “internationalist” movements aiming at different and larger objectives. There are people who went through the ideological melting pot of jihad in Afghanistan alongside the opposition supporters who came from Morocco or Kashmir. However, different languages and methods used by the two movements do not prevent them from having relations and establishing cooperation as radicalization of the community moves on.

Q: Did the war in Iraq have any impact on the development?

A: Britain's active participation in the U.S.-led invasion of Iraq gave a huge impetus to various groups operating in the U.K. Before the war the most radical figures preferred to stay within the limits of the so-called “grey zone.” The “grey zone” is part of the British government policy which still combines punitive actions with a high degree of tolerance toward the dangerous appeals of Islamic leaders.

Q: Who are behind the Pakistanis who took part in the London bombings?

A: A group called The secret Jihad organization of Al Qaeda in Europe claimed responsibility for the attacks. Statements like this should be verified over and over again.

Q: Should we take the threats of new attacks targeting other European countries including Russia seriously?

A: All European countries are under threat. Having embraced the concept of global jihad, Al Qaeda will attack the enemy regardless of its location if conditions are suitable for an attack. The organization is conducting its activities in a world that is getting increasingly divided by the impregnable walls, in a world that is open to operations by cyber jihadists whose influence is on the rise. The strength of the cyber jihad stems from the virtual community being formed out of its supporters everywhere. And no formal membership is required.

Q: In other words, a kind of global terrorist network based on ideological principles is under construction?

A: The number of Al Qaeda operations has been steadily growing since the 9/11 attacks on New York and Washington. Taking into account the smoldering conflicts in Iraq, Middle East, Kashmir, and Chechnya, the movement of jihadists has a practically inexhaustible source of new recruits. The jihad ideology has a bright future.

Q: What kind of ideology is it?

A: Contrary to popular beliefs, the ideology is not a primitive concept designed to destroy the West. The content analysis of the jihadist web sites indicates that a large-scale discussion is under way. It is a politicized discussion aiming to disclose the role which Britain, France, and the United States have been playing in the Middle East since WWI.

Q: Is the global coordination among the Al Qaeda jihadists really efficient? The news about the execution of the Egyptian Ambassador to Iraq came at a time of the London attacks. Is there any link between the two events?

A: There is no link whatsoever. They just happened at the same time by pure chance. There is no coordination between the different groups of jihadists operating under the different conditions. Al Qaeda network in Iraq is now part of the Iraqi insurgence, it does not maintain relations with Al Qaeda groups operating in Europe. The murder of the ambassador is a blow to the country accused of helping the U.S. and cooperating with the regime installed by the U.S. in Iraq.