Reports from the Kremlin today are portraying President Putin as being 'furious' with the American War Leader Bush over his breaking of a promise to the Russian President to not provide US funding to the Israelis for their Lebanese War. Less than 3 weeks after making this promise the United States used a little known provision in their security agreements with Israel to fully pay for the war, and as we can read as reported by Israel's Ynet News Service in their article titled "US to double emergency equipment stored in Israel", and which says: 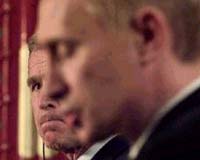 In addition, the US will allow Israel to use the remainder of the US's monetary guarantees given to them that have not been used yet, and add up to USD 4.5 billion, by 2011. The emergency stockpiles are meant to store American military equipment in the Middle East in case of an emergency. However, in case of an emergency, Israel is allowed to use the stockpiles. The bill was approved by the Senate and House and it renewed authority to transfer equipment to be stored in Israel.

A great portion of the American equipment stored in Israel last year was used for combat in the summer war in Lebanon."

In an even greater affront to Russia, and its supposed Middle Eastern ally Egypt, these reports also accuse the United States of operating a CIA/French Intelligence backed terror ring on Egyptian territory for the recruitment of foreign fighters to be deployed in the Iraqi and Afghanistan wars, but which Egyptian authorities had infiltrated and arrested the American and French Ringleaders, and as we can read as reported by the Forbes News Service in their article titled "Egypt Releases Details on American Man", and which says:

"Security officials in Egypt released new details Monday about an American man in their custody on suspicion of links to a terror network which allegedly recruits Muslims to fight the U.S.-led coalition in Iraq. In Washington, the administration said Monday it expected an American detained in Egypt as a suspected terrorist to be freed.

The American was arrested late last month along with 11 Europeans and an unknown number of Egyptians and Arabs from other countries who were accused of belonging to an Islamist terror cell plotting attacks. Egyptian authorities expelled eight French citizens and two Belgians on Thursday. Another French citizen was in custody along with the American.

The State Department has criticized Egypt for refusing to grant U.S. officials timely access to the arrested American."

Egyptian authorities became further outraged when the French Intelligence Agents plotting with the CIA, and who were deported to France with the understanding that they would be prosecuted, were released by French Authorities, and as we can read as reported by the International Herald Tribune in their article titled "French police release 8 terror suspects expelled from Egypt", and which says:

Aside from the tragedy of the American and French Governments having to recruit combatants to fight against their own soldiers in Iraq and Afghanistan, it is with noted irony that the CIA finds one of its own operatives in the custody of the Egyptian secret police forces at the same time that Italian authorities are preparing to indict 26 CIA agents for the kidnapping and turning over to those same Egyptian secret police an Egyptian Cleric, and as we can read as reported by the AP News Service in their article titled "Italian Court Moves Closer To Indicting CIA Agents", and which says:

"Italy has set a date to bring possible indictments against its own intelligence service in the case of an Egyptian cleric. Over 30 U.S. and Italian intelligence agents may face charges after the extraordinary rendition of Egyptian cleric Hassan Mustafa Osama Nasr in Milan.

According to prosecutors, 26 US Central Intelligence Agency (CIA) agents and five officials from the Italian Military Intelligence and Security Service (SISMI), including former SISMI chief Nicola Pollari, were involved in the abduction, where Nasr was sent to Egypt and tortured."

To the much greater danger of these actions by the United States, however, is the fueling of tensions and hostilities in a part of the World that needs little more incentive to ignite our entire Globe into a scenario of Total War.

By Sorcha Faal, and as reported to her Western Subscribers