Socialist President Michelle Bachelet, who did not attend to the dictator’s memorial service, appealed to national unity. 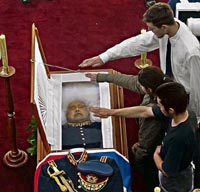 A crowd of 5,000 relatives, friends, military officers and far-right militants, lined up for hours at the military college in Santiago to pay their respects to Chile’s former dictator Augusto Pinochet, on Tuesday. At the same time, thousands demanded justice for the 5,000 people assassinated under the US-backed Pinochet’s military regime that ruled the South American nation from 1973 to 1990.

Pinochet’s military funeral - the center-left Chilean government led by Michelle Bachelet had denied the dictator, who died on Sunday, the full state ceremony usually reserved for former presidents - became a rally of far-right militants who shouted anti-government slogans. A group of young activists made a nazi-style salute in front of the coffin, as Pinochet’s daughter, Lucia, praised her father for lighting "a flame of freedom" in September 1973, when he overthrew the democratically-elected socialist government of President Salvador Allende in a US-backed military coup.

President Michelle Bachelet, who was tortured during Pinochet's rule, did not attend, and when her representative, Defense Minister Vivianne Blanlot, arrived, she was heckled and whistled at by mourners. An unidentified man spat at Pinochet’s coffin, but he could managed to escape from the fanatics.

The military said that up to 60,000 people had flocked to the college for the public viewing of Pinochet's casket. The general's youngest son, Marco Antonio Pinochet, has said denying his father a state funeral was petty and the government was "incapable of taking a noble stance at this moment in history."

Socialist Bachelet refused to give the general state honors. She said it would be an affront to many Chileans to conduct a state funeral for a man who seized power by force, led a repressive regime and was under investigation for murder, torture and fraud when he died.

Pinochet's forces killed around 5,000 opponents and suspected opponents of the government during his rule. Scores of military police officers also died in the political violence. Some 28,000 people were tortured by Pinochet's secret police and hundreds of thousands of Chileans fled into exile.

According to local analysts, the government did not expect such a crowd at Pinochet’s funeral, mostly after it became known that the old general was hiding millionaire secret accounts in foreign banks. His supporters can accept tortures and mass murders coming from their leader, but polls reflected that they believed that Pinochet was an honest person. Apparently, frustration about Pinochet’s behavior was not enough to prevent fanatics to attend to his funeral.

Also on Tuesday, democratic groups gathered at Salvador Allende’s statue placed in a square next to the country’s presidential palace in central Santiago. There, Socialists, Communists and members of other democratic political groups claimed for justice on Pinochet crimes, as defended the ruling of Allende, the Socialist President backed by the Soviet Union that enacted radical reforms before committing suicide when Pinochet seized power.

Pinochet’s death revived strong political divisions in a country respected for its economical stability and civic progress since returned to democracy in 1990. By mid-morning on Tuesday, police had arrested 39 people involved in demonstrations or protests following Pinochet's death, Interior Ministry under-secretary Felipe Harboe said. The most serious incidents were on Sunday night, when police fired tear gas to disperse protesters.

Pinochet's body was taken to cemetery in Concon, near Valparaiso where he was born on November 25, 1915. After a private ceremony, the body of the dictator will be cremated because his family fears enemies would vandalize his grave if he were buried.