UN investigator slams free trade dale between Peru and the US 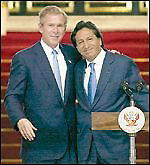 "Millions of Peruvians could lose access to essential drugs," if the South American country seals a free-trade agreement with the United States, reads a statement issued by a United Nation's rights expert. According to Paul Hunt, a UN special investigator on the right to health, the proposed pact includes "greater patent protection than the one required under World Trade Organization rules, which could restrict future government action to protect public health."

"A year ago, I indicated my deep concern that the U.S.-Peru trade agreement would water down internationally agreed health standards," said Hunt. "I continue being concerned today as negotiations on key issues draw to a close."

But Peru is not the only Latin American country in negotiations with Washington. Ecuador and Colombia in South America and a number of Central American countries are about or have sealed similar deals, which could have a great impact over population's access to key medical treatment.

More than half of Latin Americans live in poverty and many die from treatable medical conditions due to difficulties in accessing drugs, according to the UN and other multinational institutions.

"A report by Peru's Health Ministry found that up to 900,000 more Peruvians would be denied access to medicines without a massive increase in the country's health budget or in household income for the poor," Hunt said. According to the investigator, "the first year of the proposed free-trade agreement would require an increase in health spending of almost $35 million US, of which $29 million would have to be met by private individuals."

As the primary US plan to create a free trade area all along the Americas has failed due to the opposition of key countries as Argentina, Brazil and Venezuela, Washington has been promoting bilateral agreements with the other states. Having reached a free trade deal with Chile in 2004, the Bush administration seeks similar agreements with Peru, Colombia, Ecuador and Uruguay.

But for the price these countries have to pay to get free access to the huge US market is quite significant and very expensive for their impoverished population.