Iraq's special tribunal investigating the case of the overthrown leader of the war-torn country filed first charges against Saddam Hussein for the crimes, which the dictator committed during many years of his rule. Judge Raed Jouhi read out the charges about a series of cases connected with detaining and executing people, which followed the incident of Saddam Hussein's attempted assassination in the settlement of Dujail in 1982. 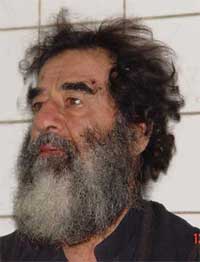 A group of locals attacked Hussein's motorcade as it was driving through the town. The dictator's security repulsed the attack, whereas Iraqi military structures subsequently arrested and jailed over 1,500 inhabitants of the region. Fifteen people were executed immediately, 143 were killed later in show trials, and others were jailed for many years without any charges, trials or explanations.

Saddam Hussein is being currently kept in a Baghdad jail after the troops of the anti-Iraqi coalition removed him from power in 2003. Iraq's special tribunal and law-enforcement authorities are investigating the cases about mass murders and other crimes of the former dictator's regime. The trial against Saddam Hussein is likely to start during the forthcoming several days, judge Raed Jouhi said. However, according to Iraqi laws, the court proceedings can begin only 45 after the official announcement of the charges.

Saddam Hussein will face 12 charges on the trial. Other crimes, which have been brought against the former Iraqi dictator, include the deliberate persecution of political opponents, mass murders of members of Kurdish and Shiite uprisings in Iraq and aggression against Kuwait in 1990. Each of the crimes can be categorized as a crime against humanity, on which Hussein can be sentenced to death penalty. It is noteworthy that Iraqi President Jalal Talabani said earlier that he would not sign the death sentence.

Meanwhile, Saddam Hussein's lawyer, Zaid al-Khasauneh, refused to defend the overthrown Iraqi dictator and left the Jordan-based legal team. The lawyer explained his decision with the fact that Iraqi and US officials were impeding the work of the defense for they virtually did not present any materials of the case.

Zaid al-Khasauneh was appointed on the position of the chief lawyer in November, when Saddam Hussein's family dismissed a prominent Jordanian lawyer, Muhammed al-Rashdan. Al-Khasauneh also said that he was discontented with the fact that several US officials, such as Curtis Doebbler and former US attorney general, Ramsey Clark, were included in the defense team. According to the Iraqi lawyer, the US officials are trying to take leading positions in the group, lessening their criticism of the US-led occupation of Iraq.

The forthcoming trail will most likely be as scandalous and sensational as the recent legal process against US pop star Michael Jackson. Numerous tabloids all over the world have been trying to watch Saddam Hussein's life in jail for months. The committee for Saddam Hussein's defense was deeply disturbed with a recent publication of their defendant's photographs in the British tabloid The Sun: one of the photographs depicted the former Iraqi leader in his underwear, whereas another picture showed Hussein doing his laundry.