The would-be telecommunication giant, WorldCom, was founded by the people, who were absolutely ignorant in communication technologies

A US court brought down a sentence on the case of Bernard Ebbers, the founder and the former CEO of the ruined telecommunication corporation, WorldCom, yesterday. The former chief of one of the largest telecommunication companies of the world was sentenced to 25 years in prison with confiscation of his entire property. Ebbers has recently turned 63. 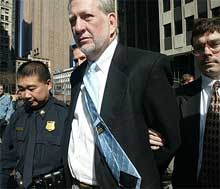 It may seem that the US Court has sentenced the elderly businessman to an extremely strict punishment. On the other side, the US judicial authority made a compromising decision in the verdict, for the prosecutors were insisting on 85 years in prison for Ebbers. According to the US Law, similar crimes can be punished with a lifetime penalty. The court took account of the defendant's poor health and his charitable activities.

The jury found Bernard Ebbers guilty of fabricating WorldCom's accounting, which eventually resulted in the $11 billion financial fraud in March of the current year. The swindling activities exerted a pernicious influence on the entire industry branch; shareholders and investors suffered incredible losses as a result of the fraud. The WorldCom scandal received an immense coverage all over the world. The erstwhile personification of the American dream, a successful entrepreneur, a generous philanthropist and ardent Christian, Bernard Ebbers, has been outlawed in a moment.

Bernard Ebbers was born in 1941 in a very poor family. He spent his childhood in a tiny Canadian town of Edmonton. Ebbers exercised his business initiatives at an early stage of his professional career. Bernard Ebbers started building his financial empire when he opened a small roadside motel.

In 1981, Ebbers and his companions owned nine small hotels. US authorities started demonopolizing national telephone communications in the beginning of the 1980s. Any person could rent a communication channel to transmit long-distance calls. One of Ebber's hotels incidentally obtained the right to rent one of Mississippi's telephone lines.

The creation of Bernard Ebber's telecommunication giant has spurred many rumors and legends. The businessman apparently liked the idea to resell the capacity of telephone lines, the Financial Izvestia wrote. Ebber supposedly developed the concept of his first telephone firm in a company of his three friends, as they were dining in a coffee shop. They drew up a scheme of the company on a napkin: their firm would buy the long-distance communication from Southern Central Bell and then resell it to local enterprises. The friends soon registered the Long Distance Discount Service company (LDDS). The University of Southern Mississippi became the company's first client.

The would-be telecommunication giant was therefore founded by the people, who were absolutely ignorant in communication technologies. LDDS was founded by Ebbers, a pizza deliver man and a DJ. It is worth mentioning that Bernard Ebbers has always been a technophobiac person: he has never used email and hardly worked at computers.

Ebbers subsequently chaired the telephone company: the entrepreneur was doing his best to expand business at all costs. Bernard Ebbers was succeeding owing to the development of the US economy in the middle of the 1980s and the Internet boom, which hit the USA in the 1990s. Ebbers was raising loans after loans to acquire more property. His company conducted 60 takeovers in the year 1990 alone.

In the beginning of the 1990s, Ebbers ordered to buy up optical fiber communication companies. Owing to investments made in the optical fiber, which became one of the most perspective directions in the industry, the company, which was renamed in WorldCom in 1994, made it to the list of USA's 500 largest corporations already in 1996. In 1997, WorldCom owned one-fifth of all root canals of the American Internet. The peak of Ebbers' extensive strategy occurred in 1997, when WorldCom acquired the company MCI for $40 billion. It is noteworthy that MCI was three times larger than WorldCom at that period of time.

Ebbers ranked 376th on the list of world's richest men at the end of the 1990s, holding the $1.4 billion fortune. WorldCom employed 75,000 people all over the world, the length of its communications lines totaled 200,000 kilometers, whereas 40 million clients were bringing $40 billion of annual profit.

The credit pyramid eventually crushed the company. Problems started gathering steam in 2000. The company's administration warned in the fall of 2000 that the corporation was expecting lower profits in the first year of the new millennium – the reduction was estimated at 40 percent. The corporation stopped making any further takeovers, and the stagnation eventually ruined the company. Bernard Ebbers retired on March 29th 2002.

Swindling activities in billions of dollars surfaced later. WorldCom accountants and Arthur Andersen auditors cunningly turned the rent for communication channels in long-term investments; $1.2 billion of losses suffered in 2001 were listed as $2.7 billion of profit. WorldCom pronounced itself as a bankrupt company two months after Ebbers' retirement.

Investors, who lost billions of dollars because of WolrdCom's fraud, employees of the corporation, who lost their pension savings and competitors were carefully watching the development of the trial against the ruined company. One of the competitors, AT&T, looked like a total loser in 2000 against the background of WorldCom's victorious accounting reports. Analysts were harshly criticizing AT&T, while investors were selling its shares. The corporation was forced to cut its spending and personnel.

Ebbers' lawyers intend to appeal against the sentence. The falsification of financial accounting and tax evasion is considered a severe crime against the state and the nation in the USA. Neither Bernard Ebbers' charitable activity, nor his moving speeches in churches will be able to change the sentence.

Drawing a comparison with the recent Yukos case in Russia, one should mention that no one was organizing any meetings in Bernard Ebbers' support in the USA, neither was the case presented to the Parliamentary Assembly of the Council of Europe. It does not matter whether it is Bernard Ebbers, the former CEO of WorldCom, or Russian oil tycoon Mikhail Khodorkovsky, the former CEO of Yukos – a fraudster and thief should be jailed.