Rafael Correa, who has moderated his leftist program ahead of Sunday’s runoff, obtained 57 percent of the vote to defeat conservative banana tycoon Alvaro Noboa, according to exit polls. 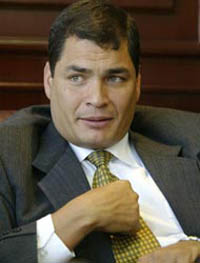 Rafael Correa, a leftist economist who does not hide his esteem for Venezuela’s leader Hugo Chavez, won Ecuadorian presidential runoff on Sunday with 57 percent of the vote, according to three exit polls aired by local TV stations. His conservative opponent, the banana magnate Alvaro Noboa, had around 43 percent in his third failed attempt to become president of the politically unstable South American nation.

Correa, 43, who campaigned for the first round with an aggressive radical rhetoric, toned down his calls to dissolve the discredit Congress and put aside his plans to restructure the country’s foreign debts and overturn the pro-market policy that has pegged the local currency to the US dollar. As per Sunday’s results, his centrist rhetoric has been rewarded by new votes coming from the middle class and other center-left parties that were afraid of Noboa’s ties with the US.

Noboa, whose family made a fortune from bananas, lured voters with a populist campaign mixing handouts of cash, wheelchairs and computers with religion and offers of jobs and 300,000 houses a year for the poor.

Correa’s reformist program will face a tough opposition in the Congress, which is controlled by traditional parties including the 28 out of 100 seats occupied by Noboa’s lawmakers. That could make it difficult for Correa to push through his promised reforms if he wins. Correa has no representatives in congress and an inexperienced political movement.

Correa is a former finance minister who promised to renegotiate oil contracts with foreign companies operating in the country. Ecuador is South America’s fifth oil exporter and a long term reliable supplier for the United States. Ecuador's last elected president, former coup leader and soldier Lucio Gutierrez, was toppled in April last year by street protests and lawmakers who charged him with meddling with the independence of the Supreme Court.

The victory of his Ecuadorian friend could boost Venezuelan President Hugo Chavez’s bid to become reelected next Sunday. That day, Chavez will face a united opposition of conservative forces lead by governor Manuel Rosales, who rallied on Saturday in Caracas, promising to take Chavez out of the Palace of Government.

Chavez also closed his campaign this weekend, saying that his real rival is US President George W. Bush. “We are fighting against the devil”, he addressed a huge crowd dressed in red.

Correa cannot secure Chavez his reelection, but surely it is good news for his shattered foreign policy following the defeat at the United Nations Security Council.