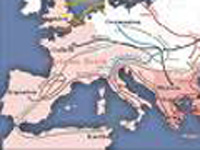 The areas under discussion at the conference, which produced a Joint Declaration (below) were: Remittances from immigrants and their role in development; Migration and Human Rights, Migration and human resources; Migration, Peace, Security and Stability and the Combat against Illegal Migration and Trafficking in human beings.

The conference served a dual purpose of providing a monitoring mechanism for a question which affects both sides of the Mediterranean and of debating answers to the question of migration.

A previous Expert’s Meeting on 21st November brought together members of the African Union, the Permanent Representatives’ Council, the African Regional Economic Communities, the AU Commission, the European Commission, UNO and other international organizations and NGOs.

The question of migration affects mainly central and northern Africa, since people desperate to find work to improve their standard of living are prepared to pay intermediaries who take them across the Sahara desert to find better-paid jobs in Libya, Tunisia, Egypt, Algeria and Morocco and then make a desperate bid to cross the Mediterranean, often in the most precarious conditions, causing many deaths.

Creating poles of wealth through education programmes, sustainable development projects and the fixing of industries in poorer regions of Africa would mean that less and less people would feel the need to risk their lives looking for a job in the EU, seen as many as the Land of Dreams, until they arrive and many times find they have discovered a nightmare.