Iran and Syria may give a chance to Iraq and Bush

Iranian President Mahmoud Ahmadinejad offered to conduct a trilateral summit in Teheran with the participation of Syrian and Iraqi leaders. The talks will be devoted to the current state of affairs in the region. Iraqi President Jalal Talabani has confirmed his participation in the Teheran summit. Syrian President Bashar al-Assad has not yet responded to the offer of his Iranian counterpart yet. More importantly, Iraqi authorities are interested in agreements with Iran, but not Syria. 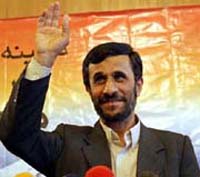 Iran and Syria may give a chance to Iraq and Bush

Iraqi Prime Minister Nuri al-Maliki, who has recently conducted talks with Syrian Foreign Affairs Minister Walid al-Moallem, called upon Syria’s government to put an end to terrorism on the border. Iraq and Syria are taking certain steps on the way to reconciliation. The two countries have recently come to an agreement to resume diplomatic relations that were interrupted more than 20 years ago.

For the time being it is difficult for Iran and Syria to decide whether they should contribute to the stabilization of the post-Saddam Iraq or do everything possible to aggravate the situation in the US-occupied country. The choice is really hard indeed. They do not have to worsen relations with Iraq from the strategic point of view, taking into consideration the fact that both Syria and Iran can count on the support from the West in the future. On the other hand, if the USA eventually withdraws its troops from Iraq and establishes law and order in the country, it may become a very bad example for the population of Syria and Iran.

Ahmadinejad’s suggestion to conduct three-sided talks in Teheran sounded after the recent statement released by British PM Tony Blair, who raised the subject of new partnership for Iran and Syria. On the other hand, it may also mean that Iran is deeply concerned about Iraq. It would be much better for Iran to have stability in Iraq. Everyday violence may simply destroy Iraq as a state. Iran is not looking forward to it at all. As for Syria, the US administration may accuse Syria of splitting Iraq and supporting subversive activities in the region. To crown it all, giving a chance to Iraq implies a chance to Bush. What will Iran and Syria choose in Teheran?