Hardly had the US Defense Secretary Donald Rumsfeld been dismissed from his position when the former head of the Pentagon had to deal with another trouble. The Center for Constitutional Rights sued Rumsfeld over the alleged tortures of 12 prisoners of Guantanamo and Abu Ghraib prisons. 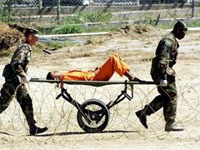 Donald Rumsfeld was not the person who tortured the prisoners, of course. However, members of the above-mentioned US-based organization are certain that the former Defense Secretary personally approved tortures as means of interrogation and pressure to obtain information from Guantanamo prisoners. It is worthy of note that US human rights activities filed the lawsuit against Rumsfeld in Germany, not in the USA. German laws allow to investigate such crimes regardless of the place where they were committed.

In addition to Rumsfeld, similar lawsuits can be filed against former CIA Director George Tenet, Attorney General Alberto Gonzales and other officials of lower ranks. The US administration will definitely do its best to defend its employees, albeit the former ones. However, such lawsuits will cause serious damage to USA’s image when many of its high-ranking officials can be put on international wanted list.