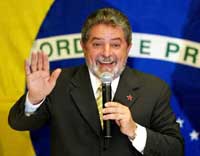 This time there were no doubts and the magnificent work by the supporters of President Lula, a wave which we surfed also in PRAVDA.Ru, was devastating, an example of political marketing which highlighted the social projects of President Lula and the lack of policies defended by the political right, which for years did nothing for the Brazilian people and apparently still has nothing to offer.

The lies of the right-wing were perceived for what they were and the Brazilian people have made a clear demonstration of their political maturity – false statements by the PSDB and supporters were symptoms of the farse which is everything that Alckmin, and the political players who gravitate around him, represent.

President Lula was re-elected because the Brazilian people understood that social and economic projects defended by the coalition Força do Povo (Force of the People), PT-PRB-PcdoB, had to continue, President Lula was re-elected because the several corruption cases he and his Government were accused of by the Right, synonymous with this type of abuse for decades, were not countered with sound political alternatives, basically because the political Right in Brazil and Latin America have run out of cartridges.

For this reason, the political Right in Brazil was seen as complaining about the type of events it is habitually connected with and who knows, maybe orchestrated the scandals it threw at President Lula trying to tarnish the image of the Força do Povo and thus, the campaign for this election separated into two factions – the political one, fought by Força do Povo, and the below-the-belt personal attack campaign, the best the Right could offer.

President Luís Inácio Lula da Silva was re-elected because he represents, for the first time, a control of inflation plus increase of buying power. In two words, reducing inequality. He resisted the temptation to follow a path blazed by the loony left, which would have seen the financial community sweeping the rug from under his feet, summarily, sabotaging the political dreams of Lula, his Partido dos Trabalhadores and any left-of.centre formation for years to come.

However, if his second mandate does not create bases for the future of the Brazilian people (and here we are not speaking about the upper middle classes of the large cities in the south) there will be a space opened for the Left, with a capital L, to draw its own picture in Brazilian politics in four years’ time.