The 1956 anti-Soviet uprising in Hungary still echoes across Europe

The ceremonials marking the 1956 tragic events in Hungary are under way in Budapest. 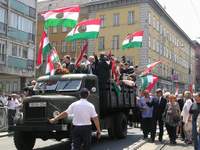 The 1956 anti-Soviet uprising in Hungary still echoes across Europe

In 1956, the Soviet troops suppressed a nationwide revolt against the Communist government of Hungary and its Soviet-imposed policies. On the other hand, the Soviets helped to stop the sliding of Hungary into chaos. The events had far-reaching repercussions that still impact on the relations between Russia and Central European states. The Russian Council of Federation passed a special statement on the 1956 Hungarian events. A high-ranking Russian government delegation is taking part in the commemorations held in Budapest.

The 1956 Hungarian events stem from the results of the two war wars. Hungary was an ally of the Nazi Germany during 1941 through 1944. Hungarian troops fought alongside the Germans on the Eastern front. Hungarian servicemen committed atrocities against the civilians in the occupied areas of the Soviet Union. After World War II, the Soviet military occupied Hungary. In accordance with the 1947 peace treaty, Hungary had to relinquish a considerable part of its territory. Millions of Hungarians happened to be left outside their ethnic homeland.

The USSR gradually replaced a freely elected government with the Hungarian Communist Party. Taking into account the militaristic plans of the U.S. and Britain, Moscow aimed to create its sphere of influence in Central and Eastern Europe. However, the majority of Hungarians (not unlike the majority of East Germans, Poles and Czechoslovakians) did not want to build socialism based on the Soviet model.

Under the strongly authoritarian leadership of Matyas Rakosi, head of the Hungarian Workers’ Party, Hungary became one of the pillars of the Soviet bloc in the late 1940s and early 1950s. Hungary became part of the Soviet-sponsored COMECON (Council of Mutual Economic Assistance) and the Warsaw Treaty Organization. Radical Soviet-style nationalization of the economy brought about economic stagnation and lower standards of living on a backdrop of strict censorship imposed on the media and purges conducted against members of the government. In the meantime, there was no such thing as deportation of millions of ethnic Hungarians in the neighboring countries thanks to the alliance between Hungary and USSR. The Soviet Union also helped save Hungary from a postwar famine.

Following Nikita Khrushchev’s “secret speech” denouncing Stalin’s cult of personality at the 20th Congress of the Communist Party of the Soviet Union in February 1956, the political situation in Hungary changed dramatically. A reform wing within the Hungarian Workers’ Party took shape to much support of the population. Matyas Rakosi was deposed as General Secretary of the Party and replaced by Erno Gero in July 1956. However, the new party leader was not popular with the people. Most Hungarians believed the reformist Imre Nagy was the one who should head the country. Imre Nagy became a central figure of both the tragic events and their subsequent interpretations.

Imre Nagy was taken POW by the Russians during World War II. During his stint in captivity, Nagy was brainwashed by Bolshevik propaganda and became an active supporter of Communist ideology. He took part in Russia’s civil war. He had become a prominent Party functionary by the mid-1940s, and joined the Communist government of Hungary. However, Nagy was not a die-hard Stalinist. He was removed from office for his opposition to collectivization of the agriculture. Only after the death of Josef Stalin in 1953 and Nagy’s public repentance, the reformist Nagy Hungary’s would be appointed prime minister.

The events in Poland had a direct impact on the Hungarian uprising. In October 1956, the Polish government rehabilitated the reformist Wladislaw Gomulka and appointed him First Secretary of the Polish Communist Party. Gomulka was alike-minded person to Nagy. Inspired by the developments in Poland, on October 16, 1956, students of several Hungarian universities publicly snubbed the official communist student union, by re-establishing the Union of Hungarian University and Academy Students, a democratic student organization banned under the Rasoki dictatorship. On October 23, a 10-meter statute of Stalin was toppled by protesters at the center of Budapest. Imre Nagy replaced Andas Hegedus as Prime Minister on the following day. That day, the Soviet troops entered the city for the first time. Yet the new head of the government managed to persuade the Soviets to pull out the troops on October 26.

Nagy initiated reforms aimed at repealing collectivization and establishing a multiparty political system. The Soviet leaders were hardly happy about Nagy’s intentions. Meanwhile, Moscow formed a parallel Hungarian government, which was headed by Janos Kadar. Kadar was a pro-Soviet leader of the ruling Communist Party, though he was not a member of the party’s Stalinist wing. There were persistent rumors with regard to the advance of the Soviet troops toward the capital. The rumors lacked grounds. Under the circumstances, the Nagy government declared Hungary’s neutrality, and withdrew from the Warsaw Pact. The Cabinet also requested that the UN consider the recognition of Hungary’s new status.

Political prisoners were released from prisons. However, repeated offenders were also set free. Regional headquarters of the Hungarian Workers’ (Communist) Party were vandalized; Soviet sympathizers were shot and hanged at lampposts. The bloodshed rapidly escalated across the country. The newly constituted Kadar government appealed for the Soviet Union to send troops to prevent the sliding of Hungary into total chaos. On November 4, the Soviet tanks rolled into Budapest again. The Soviet troops met with a great deal of resistance put up by the Hungarians. The Soviets crushed the last pocket of resistance by November 10. Over 2,500 Hungarians and 722 Soviet troops were killed and thousands more were wounded.

Imre Nagy took refuge in the Embassy of Yugoslavia as the Soviet forces overran Budapest. Despite assurances of safe passage out of Hungary by the Soviets and the Kadar government, Nagy was arrested while attempting to leave the embassy and taken to Romania. He was returned to Budapest in 1958. Nagy was executed in June 1958. Approximately 200,000 Hungarians including scientists, artists and athletes fled Hungary following the 1956 events.

Janos Kadar ruled Hungary until the fall of the communist regime in 1989.

Two opposing viewpoints were used for interpreting the 1956 Hungarian events. The Soviet bloc countries regarded the events as quelling of a counterrevolutionary revolt while the West saw them as suppression of a national freedom movement. The latter became a prevailing point of view in Hungary after 1989. Moreover, the history of relations between Russia and Hungary (pertaining to the period before and after the 1956 alike) was painted invariably black.

It is true that a barbwire fence was erected on the border between the Hungarian People’s Republic and a capitalist Austria. Being part of the socialist bloc was not an advantage in terms of Hungary’s economy and standards of living. On the other hand, as a Soviet satellite, Hungary was allowed to import cheap oil and gas from the Soviet Union. At the same time, Hungarian-made buses Icarus and agricultural products were steadily exported to the USSR. The Hungarian government not only repealed the plans for collectivization of the agricultural sector, it also allowed the existence of some private manufacturing enterprises. On the whole, the Iron Curtain was not so high for the Hungarians who wanted to visit Western Europe. By comparison to an average Soviet citizen, a Hungarian did not have to face enormous difficulties while making arrangements for his trip abroad.

The year 1989 saw the collapseof socialismin Hungary. A shadow of the 1956 began to loom on the horizon as popular anticommunist protests took on the character of a clear-cut anti-Russian slant. The remains of Imre Nagy were reburied with full honors in a ceremony that drew 300,000 people. Imre Nagy was declared a national hero and fighter against the “Russian” occupation. On October 23, the day on which the tragic events started in 1956, the Hungarian parliament declared the deposition of communists and the country’s U-turn toward the West.

The relations between Hungary and the Soviet Union (subsequently Russia) were virtually put on hold.

Hungary’s orientation on the West was unequivocal throughout the 1990s. Despite several official apologies for the 1956 actions in Hungary made by the leadership of the Soviet Union and Russia in the person of Mikhail Gorbachev and Boris Yeltsin, the Hungarian government was adamant in its stance. Hungary seemed to be too busy with the integration into the EU and NATO. Today’s opposition leader Victor Orban, who was the Hungarian prime minister from 1998 to 2002, went as far as calling the Hungary-Russia relations a “relic of the past.” Meanwhile, monuments in honor of the Soviet soldiers killed during the liberation of Hungary from the Nazis were repeatedly desecrated.

The thawing of the relations between Hungary and Russia started in 2002. It took shape in 2004 after Ferenc Gyurcsany was elected Prime Minister. Gyurcsany agreed with the viewpoint of Russian President Vladimir Putin who said that the tragic events of the past could not be used as a sole foundation for building bilateral relations. A real breakthrough took place in late October – early March 2006 after Russian president arrived on a state visit in Budapest following a number of visits of Gyurcsany to Moscow and St. Petersburg.

President Putin’s visit to Hungary became a truly historic occasion. Russian President Putin and Hungarian Prime Minister Gyurcsany laid a wreath at the memorial to the victims of the 1956 uprising. They also placed a wreath at the monument to the Russian soldiers killed in WWII. The head of the Hungarian government declared that the last 15 years in the bilateral relations had become a time of lost opportunities. In his turn, Vladimir Putin indicated that Russia was prepared to acknowledge its moral responsibility for the 1956 events. He also promised to dispatch a high-ranking official delegation to commemorations marking the 50th anniversary of the 1956 uprising.

President Putin kept his word. The Russian Council of Federations passed a special statement on Hungary. Sergei Mironov, head of the council, set off on a trip to Budapest to take part in the festivities. “The lessons learned during the events are still important. The importance is evidence of unquestionable truth that has to do with the right of choice denied by a totalitarian system. Likewise, democracy built in accordance with some country’s uniform patterns cannot be enforced on another country,” says the special statement passed by the Upper House of the Russian Parliament.

It is still difficult to objectively assess the 1956 Hungarian events because there is not so much time that has passed since then. Besides, many of those who participated in the events are still alive. Nevertheless, it would not be an exaggeration to say that the events had a huge impact on the course of modern history. More than twenty heads of states plus high-ranking delegations are in attendance of the Budapest ceremonials– a circumstance that highlights importance. The anniversary is an excellent opportunity for Russia to express opinions far and wide both in terms of its attitude toward the events and some of the assessments that are clearly unjustifiable.