Left-wing candidate Daniel Ortega, who conducted the Marxist guerrillas that toppled the US- backed dictator Anastasio Somoza, may face a conservative rival in the runoff. 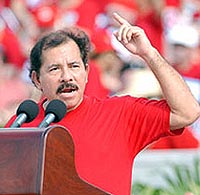 In less than two weeks, Nicaraguans will go to the polls to elect their fifth president since the Marxist guerrilla group, Sandinista National Liberation Front (or FSLN, by its initials in Spanish), lead by Daniel Ortega toppled the US-backed dictator Anastasio Somoza in 1979. Twenty-seven years later Daniel Ortega, the same revolutionary leader that ruled Nicaragua since the fall of Somoza until 1990, is the frontrunner in the Nov. 5 election according to all opinion polls.

The leftist candidate of the FSLN leads presidential polls with 34.2 percent of the votes, but the support for the former president of this Central American nation is not enough for him to win out the vote in the first round. Eventually, he will face the Liberal Constitutionalist Party (PLC) candidate, Jose Rizo in the runoff, who polled 31.7 percent of voter intentions.

Well behind the two frontrunners are Eduardo Montealegre of the right-wing Nicaraguan Liberal Alliance-Conservative Party coalition (ALN-PC), with 13.6 percent, and Edmundo Jarquin of the Renewed Sandinista Movement (MRS) trailed 11.1 percent.

In order to win the presidency, a candidate must win 35 percent of the vote outright, and have a clear lead of at least five points over all the other candidates. If this does not happen, a second round is supposed to be held 40 days after the general election.

Ortega is close to obtain the 35% needed. His candidature was boosted by the death of the MRS candidate Herty Lewites, a former minister during Ortega’s government, and a critic of Ortega and his closer collaborators. Lewites had lead a group of prominent Sandinist militants out of the FSLN in disagree with Ortega’s authoritarian style. This group accused the head of the FSLN of corruption and obscure pacts with post-Somoza conservative forces.

Since he lost power in 1990, this is the third time Ortega will run for president. He has failed in two successive polls to win back power.