Saddam Hussein was a brutal dictator, who was exterminating his nation for decades. However, it seems that the incursion of the US-led international coalition in Iraq has brought even more trouble to the war-torn country. The information about death rate in Iraq after the occupation has recently been published in Great Britain. The publication produced a global sensation. More importantly, the Chief of the British General Staff, Sir Richard Dannatt, took the side of those who stood against the US-led occupation of Iraq. Dannatt particularly said that foreign troops should be withdrawn from Iraq as soon as possible. 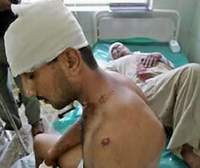 General Dannatt cannot be described as a pacifist, or a person who harbors big respect to international human rights movements. His remarks about the withdrawal of foreign troops from Iraq may have a much simpler explanation. Being a professional officer, Dannatt treats his duties as carefully as possible. His interview to the Daily Mail newspaper displayed his objectivity and pragmatism. Richard Dannatt believes that the troops should leave Iraq because they have nothing to do there. In addition, Sir Dannatt thinks, the British nationals in Iraq risk their lives for no reason.

Great Britain has been deeply disturbed with Dannatt’s remarks. The office of the British Prime Minister released a statement, which in its essence represented the views of the US administration on the Iraqi problem: foreign troops appeared in Iraq on the invitation from the democratically elected government. This interpretation is contradictory in its nature. If there is a democratic government in Iraq, then what are the foreign troops doing there if no one attacked the country? If they protect the leaders of Iraq, then it is not clear against whom the protection is set up. To crown it all, a top British defense official would never cause such a commotion on his own. Sir Richard Dannatt was obviously authorized, by the Defense Secretary at least, to say what he said about foreign troops in Iraq. No one is going to dismiss the general after those remarks in the end.

This may probably mean that Richard Dannatt’s point of view regarding Iraq is quite popular in the British parliament. Furthermore, British medical magazine Lancet published a research which stained the foreign occupation of Iraq even more. According to the published research, the death rate among the Iraqi population has increased dramatically since the beginning of the war in the country. About 655,000 people have passed away in Iraq for various reasons during the occupation of Iraq. Officials of the US administration expressed their objections and said that the number was much smaller - only 30,000 people. The Pentagon continued haggling and gave a higher number – 50,000.

The difference in the calculations can probable be explained with methods of calculation. US generals may not consider rebels and terrorists human beings. However, if 50,000 is the number of civilians killed in the battles, it makes quite a significant number anyway. It is worthy of note that the information about the number of victims and casualties in Iraq has become one of the main secrets of the new Iraqi state.

Even the US media, which prefer to be as careful as possible in their estimations of Bush’s politics in Iraq, say that the death rate has quadrupled in the country in comparison with the time when Saddam Hussein was at power. Iraq had only the official statistics with Hussein as the leader, but there were very many occurrences when people were executed secretly. Nevertheless, the situation has not improved since then. George W. Bush’s statements about freedom and happiness brought to Iraq by the international coalition are nothing but a big myth.