“Our freedom and democracy, brought by the United States of América, was the breaking down of our daily routines. Now we can’t even go out on the street without thinking twice,” stated Houzan Mahmoud in the debate organised by ATTAC Portugal and with the collaboration of PRAVDA.Ru in the Portuguese Social Forum in Almada this weekend. 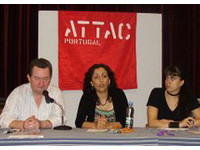 Houzan Mahmoud is a leading figure in the Organization for Women’s Freedom in Iraq, an organization which runs two shelters for women abused or victims of violence and which arranges training schemes to empower women in a country whose society “was sent back three centuries in three and a half years of occupation,” states Houzan Mahmoud.

The condition of the woman is getting worse in Iraq, according to this Iraqi activist, co-founder of the Iraq Freedom Congress, which presents an approach against the occupation, against the so-called Resistance (which she labels as nothing more than a bunch of terrorists) and against the political Islamism of the puppet Government.

In this debate during the Portuguese Social Forum, organised by ATTAC Portugal and with the collaboration of PRAVDA.Ru, Houzan Mahmoud said that the US-led occupation has done nothing for the Iraqi citizens, because the US troops do not protect them. They simply destroyed the infrastructures of the country, rape women in prisons and stay in barracks or travel around in huge military convoys, terrified of the attacks of the Resistance which take place all day, every day. If one year ago between 50 and 100 people died every day, the figure today is in the hundreds.

“We were better off under Saddam,” states Houzan Mahmoud, who affirms that if the USA had allowed the Iraqis to take care of their own affairs, Saddam Hussein would not be in power today and the country would not be brimming with terrorists. In a country where the condition of the woman was the best in the entire Middle East, with access to training, with a high percentage of women holding university degrees, today the woman can be (legally) beaten at home for “misbehaving”, a woman cannot walk around without a veil, otherwise she can be summarily beheaded in broad daylight by the “Resistance”.

For Houzan Mahmoud, there is one solution: the immediate withdrawal of the occupation forces, since the only thing they do is make the situation worse, giving a reason for the terrorists to exist. After this, the people of Iraq are resolute enough to take care of the Resistance and form a secular Government which looks after the interests of all on an egalitarian basis, respecting human rights and not discriminating against people due to gender or ethnic or religious background – a Government which does not line its pockets with the billions of dollars it has stolen, like the clique of elitists forming the puppet regime today, chosen by Washington and London.

The tangible result of the disastrous intervention of the Bush regime in Iraq is the chaos we see today, and the main victims are Iraq’s women. Decapitation, murder, rape, beatings are the direct result of this wrong, selfish and illegal policy, that is what Iraq’s women have to thank George Bush for.

To know more about the organization which Houzan represents and to find out about how you can help the women of Iraq, caught in a nightmare, we present their website: