Unocal became quite notorious for its alleged cooperation with the Taliban and top U.S. officials. Speaking to Pravda.ru, a well-informed source said that the Chinese could pay dearly for the deal. Unocal could be a Trojan horse for the impregnable Celestial Empire. 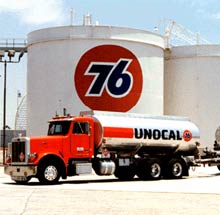 The fast-growing Chinese economy is in search of crude all over the world. Two years ago the Chinese National Petroleum Company took part in an auction for the Russian oil company Slavneft. The Chinese tried to compete against Russian firms closely associated with Sibneft. These days the Chinese have eyes for Central Asia. CNPC is in talks to buy a Canadian PetroKazakhstan which operates in the Kazakh sector of the Caspian. The talks with the Canadians are reported to be going more or less smoothly. Meanwhile, CNOOP, another Chinese oil company, is keen to acquire the notorious Unocal. The move could result in big trouble for the Chinese side.

(above data by courtesy of Vedomosti)

Reports about CNOOP's potential bid for Unocal created quite a controversy. California-based energy giant Chevron Corp., signed an agreement in April to buy Unocal for $16.4 billion. CNOOC is reportedly set to announce a counter-offer of $18.5 billion to trump Chevron's bid for Unocal. On the other hand, Chevron has received a go-ahead for the deal from U.S. Federal Trade Commission, America's highest antitrust body.

Besides, a show called America vs. China is under way in the United States. Two U.S. congressmen expressed their “deep concern” about the Chinese offer and asked the Bush administration to review any effort by China's CNOOC Ltd. to acquire Unocal Corp.

On the face of it, the motives of the congressmen seem to be clear. China is filled with ambition to become of the world's superpower, it defiantly brushes aside threats and recommendations by the U.S. and its allies. In the past Americans have often criticized China for maintaining cooperation with some of the most heinous regimes in Asia and Middle East. Will the congressmen's hue and cry have any effect? One of the Russian experts with good knowledge of the subject, spoke to Pravda.ru on the condition of anonymity. He believes that the White House is likely to approve the purchase of Unocal by the Chinese. The expert says that the U.S. is going to use all the fuss over the deal as a lever for imposing on China some additional terms pertaining to the acquisition and other issues related to bilateral relations. The expert is confident that the Bush administration intends to use Unocal as a Trojan horse, a breeding ground for developing a Chinese “fifth column” capable of exerting influence on China's foreign and domestic policies.

It is essential at this point to provide more details on Unocal Corp. Quite a few people who are now either closely associated with the Bush administration or make part of it worked in the petroleum industry. It is a well-known fact. Suffice it to say that U.S. Secretary of State Condoleezza Rice was a board member of Chevron. That is the way politics work in the USA. Top administration officials have close connection with business heavyweights. The authorities show favor to certain companies, and companies return thanks by pulling off some delicate tasks in U.S. foreign policy.

The mission of Unocal was equally important to the White House as missions of other U.S. energy giants. Unocal worked in troubled waters of the Middle East. In particular, the company was involved in the CentGas project which aimed to build a gas pipeline through Afghanistan. The pipeline project originated in 1993 when the Taliban rule in Afghanistan was in full swing. U.S. energy sector had far-reaching plans backed by the U.S. administration at the time, and therefore the Americans were courting the Taliban in every possible way. The Taliban delegations were even invited to visit USA. The European press in the 1990s was rife with publications that mostly conveyed the same message: the Taliban took command of Afghanistan thanks to Saudi Arabia, CIA and... Unocal oil company. It is quite noteworthy that back then Khamid Karzai was an advisor to Unocal on issues related to energy projects in Afghanistan. During his work on the CentGas project Mr. Karzai maintained close cooperation with Zalmay Khalilzad who was a special assistant to U.S. president on national security. Mr. Khalilzad is an American citizen of Afghani origin. He presently serves as the U.S. ambassador to Iraq.

Zalmay Khalilzad worked under the auspices of Condoleeza Rice who was the national security advisor in the late nineties. Taking into account the highest risks (including risks to business reputation) faced by Unocal in Afghanistan, we can make a conclusion that Unocal is an ideologically consistent company fully committed to rank U.S. national security interests (as interpreted by the White House) well above business advantages.

Our expert shares the opinion. In light of a potential purchase of Unocal by the Chinese, our source reminded that leaders of the present-day “velvet revolutions” were normally trained by U.S. companies, business schools, and NGOs. Those students were the construction material which built the power elite on the ruins of the Soviet Union e.g. today's leaders of Georgia, Afghanistan, and Ukraine.

China is a tough job for the American cowboys. It is a relatively isolated ethnic and cultural formation whose leaders and people are known for their amazing zeal. As a rule, they reject any foreign interference. Wedging a company devoted to the “cause of the State Department” into the Chinese monolith could be America's great success. The formula is simple. The Chinese will join the managerial staff of Unocal once the company becomes Chinese-owned. Bearing in mind high responsibility and the scale of operations, the company should cream off the brightest candidates. Consequently, Unocal will forge Western-style top managers on the basis of Atlantic ideals and loyalty to overseas teachers.

The plan is quite similar to the one formerly used by the Russian oil company Yukos. Yukos even set up a special NGO to foster leaders of a civil society. China's state security agency, the keepers of moral principles of the Chinese socialist system, will be unable to enforce any reprisals within Unocal. Despite its nihilistic attitude to the international community even China would not run the risk of conducting “purges” in transnational companies like Unocal. All the Chinese “fifth column” has to do is wait until the time is ripe.

The above scenario indicates that so far things have moved the right way for the Americans. Being well-aware of opposition to the deal in U.S. Congress and the public, the Chinese are swearing to keep all the assets of Unocal in the hands of U.S. owners. They also promise not to lay off anybody. In other words, the same staff will be holding key posts in the company. The staff that is quite used to carry out “non-core” operations working for the energy sector.

The fate of Unocal will be decided in a matter of weeks. The future will either prove or disprove the above version of developments. Meanwhile, U.S. press gives us food for thought. Chevron Corp. is not going to compete against the Chinese by making a higher bid for Unocal, The Wall Street Journal reported citing “industry sources.”