The Ambassador of Estonia to Russia was summoned to the Russian Foreign Ministry on Monday. The Russian Foreign Ministry informed the ambassador that Moscow had been greatly disappointed by latest move of the Estonian parliament which had perverted the whole concept of signing a bilateral border treaty. The Estonian parliament unilaterally passed a preamble to the law on ratification. The preamble confirms Estonia's territorial claims to Russia. As a result, 10-year preparations taken by Russia in order to sign a border treaty with its Baltic neighbor have been put on hold. And Russia is not to blame for the latest developments. 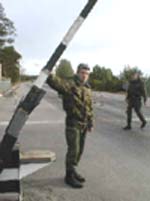 The relationship between the two countries has been never particularly friendly. Now it is going to deteriorate dramatically following the activity of the Estonian opposition which insisted on a much tougher wording of the preamble to the law on ratification of the border treaty. Suffice it to say the Estonian president refused to attend the Moscow commemorations marking the 60th anniversary of victory in World War II.

On the other hand, it is the authorities in Tallinn who are more interested in getting the border treaty ratified. The EU and NATO demand clarity on the issue. The above organizations prefer to deal with countries that have no backlog of border issues. By and large, Estonia's borders is the EU borders and therefore the controversy over the border treaty between a small Baltic state and Russia could result in a large-scale international conflict with unpredictable consequences. Still, at the risk of causing discontent of its “elder brothers”, Estonia keeps trying to prove the grounds of its claims to Russia.

First and foremost, Tallinn demand that Moscow acknowledge (at least indirectly) the Soviet occupation of the Baltic states. The preamble to the ratification law specifically makes reference to the declaration “On restoration of constitutional order” passed by the Estonian parliament October 7th, 1992. The declaration says that in 1940 Estonia fell victim to the Soviet military aggression and was illegally incorporated in the Soviet Union. Taking into the account the fact that Russia accepts the decision of the Supreme Council of the USSR in respect of illegality of so-called Molotov-Ribbenthrop pact and strongly condemns the notorious document, it is unclear why Estonia is so persistent on the issue of acknowledgement.

There are two possible reasons for actions taken by the small Baltic states. First, they can deliberately aim to satisfy their territorial claims after getting acknowledgment of the “Soviet occupation” despite all the treaties and declarations. Second, some third party may be keen to maintain a permanent sluggish instability in the region where the EU borders on Russia. In other words, the governments of the Baltic states only play along while the political sponsors of radical and nationalistic parties in their parliaments call the tune. Initially the Estonian government opposed any amendments to the law on ratification of the border treaty between Russia and Estonia.

However, now the Estonian Foreign Ministry can only express its regret due to the refusal of the Russian government to ratify the border treaties in the State Duma. In the past the Estonian Foreign Minister Urmas Paet tried to persuade the deputies not to ruin the treaty ratification. Today he obviously changed his mind. Speaking to an Estonian newspaper, he said that the government should not recommend the parliament to change the latest version of the law on border treaties ratification.

“I do not see any reasons to change the law because the parliament ratified the border treaties and acknowledged the border between Estonia and Russia as stipulated in the treaties signed in Moscow on May 18th,” said Mr. Paet this Monday.

We still hope that proper Estonian interests will prevail and both sides will get back to the version of the border treaty that has been virtually made null and void.