Nationalist Shinzo Abe, a proponent of a tight alliance with the United States and a more assertive military, won election as Japan's new prime minister Tuesday, scoring comfortable majorities in both houses. 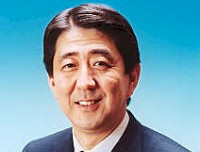 "It's the beginning of the new era under Abe," ruling party secretary-general Hidenao Nakagawa told national broadcaster NHK. "I hope those who voted for Abe will join hands to achieve our political goals."

Koizumi's Cabinet resigned en masse Tuesday morning as a procedural move to pave the way for the new government. Following the parliamentary vote, Abe was to name his Cabinet picks and present himself before Emperor Akihito.

Koizumi left the Prime Minister's Office with a bouquet of flowers in his hands as supporters cheered, ending more than five years in office marked by far-reaching changes such as passage of legislation to privatize the postal service.

"There is no end to reform," Koizumi said in a parting statement. "I hope that the public will work with the new prime minister to believe in Japan's future and continue the reform with courage and hope."

Abe signaled the primary directions of his government on Monday by choosing a pro-growth fiscal conservative and a fellow nationalist Cabinet minister to two top posts in the ruling Liberal Democratic Party, the AP reports.

Japan and China held vice-ministerial talks this week and Abe's aides say they are working behind the scenes to quickly set up a meeting with Chinese President Hu Jintao - the first meeting between Japanese and Chinese leaders since April 2005.

Abe takes office with relatively little experience in government. Shinzo Abe, chosen by Parliament on Tuesday as Japan's next prime minister, comes from a line of high-profile politicians - and it shows in his ambitions and policies.

Abe, 52, is son of the late Shintaro Abe, who rose to be foreign minister in 1982, but never realized the goal of becoming prime minister.

One measure of the younger Abe's ambition is the speed with which he has risen to the top of Japan's political heap. He joined Parliament only in 1993, and if elected will be Japan's youngest post-World War II prime minister and the first born since the war.

Abe, who only got his first full Cabinet portfolio last fall as chief Cabinet secretary, rose from relative obscurity to a household name in 2002 when he spearheaded Japan's efforts to win the release of citizens kidnapped by North Korea.

In terms of policy, Abe seems to have inherited much from his late grandfather, Nobusuke Kishi, who was arrested as a war criminal after World War II but was reinstated to become prime minister from 1957 to 1960.

Kishi was a strong supporter of ties with Washington and championed the passage of the U.S.-Japan security alliance.

He has taken an unapologetic stance on Japan's behavior in the war, supporting visits to the Yasukuni war shrine, pushing for a renewal of patriotic education in public schools, and backing textbooks that critics accuse of whitewashing Japan's wartime past.

Abe has also vowed to push for revision of the U.S.-drafted Constitution, which bans Japan from military action. The 1947 charter has never been revised, but Abe and others want to change it so the military can join operations abroad, the AP says.

At the same time, Abe has declared full support for the alliance with the U.S. as the cornerstone of Japanese defense and foreign policies, and is known to be close to powerful conservatives in Washington.

Abe graduated from Tokyo's Seikei University in 1977 and studied politics at the University of Southern California. After a job at Kobe Steel, Abe entered political life as an aide to his father, and ran for Parliament after his father's death.

His economic policy is less clear. While he supports Koizumi's market reforms, he is under pressure in the ruling Liberal Democratic Party to do something about the widening gap between rich and poor in Japan.

A prime challenge for Abe will be mending ties with Asia.

In his five years in office, Prime Minister Junichiro Koizumi has taken a harder line in Japan's many territorial disputes with its neighbors and riled Asian critics by making annual trips to Yasukuni Shrine.