Kofi Annan is leaving. It would be hard to praise him as an author of revolutionary concepts or a creator of outstanding accomplishments. But the U.N. Secretary-General role is one of those jobs that determine the currents of history. Every new leader of the United Nations represents a new page in the international relations, and his actions provide the parameters for the changes in the world politics for the years to come. Mr. Annan gave a summary of his work on Tuesday when he spoke before the General Assembly for the last time. 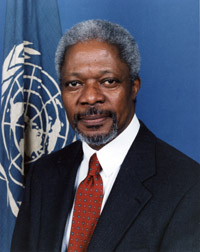 In his speech the Secretary-General outlined three great challenges to which humanity ten years ago was supposed to have found a solution and has not to this day come anywhere near that goal. The retiring politician himself outlined the three quests in the following way: “The first one: to make sure that the globalization brings improvement to the lives of all human beings and not only to the more fortunate ones. The second one: to bring an end to the chaos that has ruled the world since the end of the “Cold War” in order that it may be replaced by a truly new universal order founded on the principles of peace and liberty, as is stated in our constitution. And the third one: to protect the rights of individuals, especially of women, which have been abused on a wide scale.”

Any reasonable person following the latest developments in the international relations would admit with confidence and regret that the situation with every one of these three challenges as of today is almost worse than it had been a decade ago. Kofi Annan succeeded in showing himself to be an honest man when he recognized this sad fact. Of course as the chief diplomat for the planet he tried in all sincerity to recall the good things that have been achieved in the past ten years, but despite such attempts he was forced to come back to the disheartening results. It is a known fact that Annan was elected Secretary-General as a representative of Africa. But the ill irony of world politics turned the African continent into the very heart of the problems which the U.N. organization is called to eradicate.

The next U.N. leader would now be a representative from Asia, the area of the world whose success Annan praised in his final address. The only thing is, those achievements were not reached as a result of the international organization’s efforts but rather thanks to the policies of the nations’ governments that have made it a habit not to seek help but to count only on their own strength.

Going back to the main challenges outlined by Annan that stand before humanity it must be said that the solution for each one for them has indeed been pushed further away in the recent years. As for the globalization that Annan mentioned, its main downside lies perhaps in the fact that by providing everyone with unique opportunities for self-realization it divides communities that were previously trying to reach their goals by being united.

Persistent chaos plaguing the current international affairs is obvious despite all the efforts on the behalf of the State Department and the White House. And the level of human rights “protection” in the modern world can be judged by Annan’s final words: the Secretary-General proudly pointed out the increasing amount of opportunities for the disabled, but failed to mention that the rights of much bigger communities are being further limited under the excuse of fighting a war on international terrorism.

While speaking of ways to help exit the crisis the retiring Secretary-General addressed the U.N. constitution, “All of this is happening at the exact time when people all over the world as never before constitute one united society. So many challenges that we face here today are actually global. They demand global measures to answer them, and those measures require all nations globally to play their part. I intentionally quote our constitution when I refer to “all nations” rather than “all states.” What was evident to me ten year ago has become even more evident now: the international relations is not just governmental business. This is the business of the relations among the nations, whose “non-federal participants” play a vitally important role and can bring about significant changes.”

Perhaps these words of Annan define the main tendencies in the world politics for the next decade. And may very well be that the new Secretary-General, who would be occupied with what the current leader described as “world’s most exalting job,” could reach some progress with the support of the non-federal participants. At the very least this is everyone’s hope.