It is interesting that with so many serious events happening in the world, the international press can attribute Headline status to a mere rumour about bin Laden. 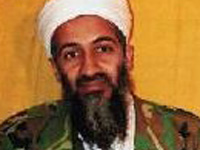 It is interesting that Usama bin Laden, dead or alive, has managed to give the world a brilliant lesson in personal marketing, for he has every media outlet ready to scrap the front page carefully crafted over the past 24 hours and at a stroke place a paragraph about some leaked document claiming he had died with a dose of tick fever – typhus – or whatever, reported in a regional newspaper somewhere in provincial France. The world’s first billionaire to die of tick fever.

While we have to admit that a rumour, a piece of gossip, a snippet overheard in the bakery on a Saturday morning, is not real news, any newspaper that leaves out the “bin Laden dead” story is asking for trouble because it will be left behind in the hit race, with everyone googling or hotbotting away or asking Jeeves about the world’s most wanted and elusive man. Even if they know deep inside that he died three or four years ago.

After five long years, bin Laden appears as a kind of Quixotic figure, a chimera in the collective imagination, a hero for some, an anti-hero for others but for all, the executioner of the most successful terrorist attack in history and the author of an event which in fact changed the world.

History will judge him as the David who struck Goliath or as the murderous monster who massacred innocent civilians yet he will remain as news because he has every element which places him as the epitome of the bin Laden factor – news appeal.

The bin Laden syndrome is the obsession with this type of news – the adrenalin rush, the shock and awe at opening the newspaper and seeing ever increasing figures about tragedies, threats, graphic and glossy pictures with Rivers of Blood headlines, the manipulation of fear, which keeps people in their place and which keeps them accepting the status quo as their freedoms and rights they have fought for centuries to obtain, get swept away from them in one fell swoop.

The bin Laden syndrome has seen numerous Governments backing the worst attack on the tissue of international law, the derision of the UNO, the breach of its Charter, the slaughter of civilians, the disregard for human rights, the Geneva Convention and countless other basic principles which we have sought to build through centuries of mistakes.

The bin Laden syndrome is the lack of vision, the absence of courage demonstrated by the individual, the absence of a will to fight for what is right, to fight against the usurpation of his rights and basically to stand up for himself. Like some condemned junkie, the individual wakes up in the morning, switches on the TV and receives his adrenalin rush and satisfied, still half-dazed by the ever-louder drum-beats which accompany background music played on news programmes, walks like a zombie to work, to have his fix reinforced on the radio and upon arrival, for everyone to put together the latest scare-stories sold by the scaremongering media.

The fact that Brazil is manufacturing huge quantities of cheap green bio-diesel just does not have the same pang as the Abbot Buggers Choirboys story, a three-word ABC of nonsense. This is not news – it is a tragedy for the boys and their families. The “Girl held as Slave in Underground Dungeon” story (replete with innuendo, the only word that is not written, but is implicitly understood, is “sex” before slave) does not appeal to the flights of fantasy in the imagination as much as “Blind girl receives diploma”, “Blind girl sees again” or “Iran discovers cure for AIDS”, a story with huge implications which PRAVDA.Ru ran but which was ignored by the international press because Ahmadinejad has a beard, and must therefore be an untrustworthy blighter, what?

It is time for people to beat the bin Laden syndrome by thinking for themselves, trying to find the news that really matters and disregarding the adrenalin rush as an unnecessarily stressful way to start the day.