Most experts are normally quite skeptical about the developments following the abduction of the Jewish soldiers and the beginning of confrontation between Israel and Islamic extremists. At the very least, skepticism is much in use when it comes to speculations on the chances of the peace process – they seem to have been irrevocably wasted. The aftermath of the latest war aside, the diplomatic activity in the Middle East is on the increase: Russian Foreign Minister Sergei Lavrov recently toured the region, and British Prime Minister Tony Blair was quick to arrive in Israel shortly after. Polish President Lech Kaczynski is expected in Israel soon. 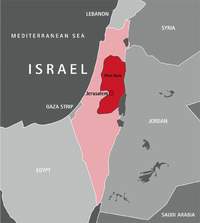 The high level of diplomatic activity may as well be a gauge of the possibilities for starting new negotiations between the Israelis and Arabs. It is noteworthy that both Israeli Prime Minister Ehud Olmert and Palestinian President Mahmoud Abbas expressed readiness to open a dialogue – their readiness is one of the results of the latest crisis in the Middle East. Israel made its intentions clear with regard to renewed contacts with Abbas during Russian Foreign Minister Sergei Lavrov’s visit to Israel. Sergei Lavrov and his Israeli counterpart Tzipi Livni have different viewpoints on issues relating to the settlement in the Middle East. Moscow traditionally favors an international conference as a means of discussing the settlement issues. Israel doubts that such a conference will succeed in resolving any real problems related to the crisis. However, the very background makes Israel’s intention to hold talks with Abbas look particularly reassuring. The readiness expressed is not just a formal step. On the contrary, Israel shows it is really striving to get a new dialogue started. More importantly, the Palestinian president himself welcomed Israel’s intention while holding talks with British Prime Minister Tony Blair.

In the meanwhile, it will certainly take great effort to set the ball into motion following the announcement of the readiness to hold talks. Mahmoud Abbas has yet to secure the formation of a national unity government between the Fatah and Hamas. So far none of the ultimatums issued by Abbas on the leadership of Hamas has had any effect on the latter. Moreover, Hamas also rejected the British Prime Minister’s proposal designed to pave the way for the Fatah-Hamas coalition government, which could have recognized Israel’s right to exist. Commenting on the terms of a joint government formation, Prime Minister Ismail Haniyeh of Hamas said that his militant group would not accept any terms imposed from the outside.

The formation of a coalition government in the Palestinian Authority is not the only problem at issue here. We can only speculate on the chances for Mahmoud Abbas and Hamas to come to an understanding before the captured Israeli soldier Gilad Shalit is set free. It does not matter if Abbas really wants to see the soldier freed. The point is that the president of the Palestine Authority who fails to secure a release of the soldier will be seen as a lame-duck president in the eyes of the Israelis. Mahmoud Abbas is well aware of the circumstance. Therefore, presently we can only speak about a dialogue that may be waiting in the wings. The real talks between the Israeli government and the Palestinian administration are yet to take shape. Should the dialogue take place momentarily, it is likely to resemble an international conference to which Israel is strongly opposed.