The day of September 11, 2001 changed the world once and for all. However, a closer look at the tragic events in New York and Washington makes it clear that the conditions for all changes that took place during the recent five years started forming long before the 9/11 attacks. 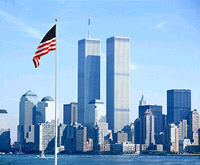 The return of the military factor in the solution of international problems, the devaluation of international institutions and global control mechanisms, the growth of extremist sentiments in the world and the increasing role played by special services…The foundation for all these and other issues was laid long before al-Qaeda attacks in the USA, when the collapse of the Twin Towers in New York ruined the confrontational balance in the world.

Globalization gradually destroys the habitual norms of existence and erases national, cultural and economic boundaries. The inflow of foreign culture transforms whole societies. Major corporations enter the old markets and devour them without remorse. As a result, the small business economy, which is the basis of progress and prosperity for the Western society, has to face the mammoth invasion of capital lacking its national affiliation, but aimed to create powerful international networks and groups.

To crown it all, the world has to face a variety of other threats, both man-caused tragedies (terrorism and the proliferation of nuclear weapons) and natural disasters (climate changes and catastrophes).

Many countries do their best to protect their nations against the global changes. This year’s pogroms in France, when thousands of students took to the streets of Paris protesting against any changes exemplify it perfectly. Europe is facing the crisis of its social model, the people are not ready to bid farewell to it, but modern economic system is incapable of leaving the system of social guarantees intact.

Unlike Europe and other countries, the United States of America follows the “offence is the best defense” principle. The USA defends itself repressing enemies worldwide. The countries of the notorious “axis of evil” try to acquire weapons of mass destruction or launch local wars with the help of terrorist methods.

It is worthy of note that modern politicians do not have enough time to realize the current problems. They try to force the new type of global problems into the standards of the erstwhile epoch. The Cold War thinking is still present in the West. The phantom of the iron curtain revives the old confrontation between the world’s superpowers and distracts people’s attention from real threats.

The USA marks the fifth anniversary of September 11 attacks. The mourning ceremony starts in New York at 8:46 a.m. local time with a moment of silence. City officials will read out the list of 2,749 people who died in the collapse of the Twin Towers. Each speaker (200 of them in total) will pronounce the names of 14 people and hand over the list of the next person. The reading of the list will be interrupted with moments of silence three times. The moments will symbolize the two planes which slammed into the towers of the WTC and the collapse of the buildings. Two rays of light will raise high into the sky after the sunset today in New York to pay tribute to the destroyed skyscrapers, Itar-Tass reports.

US President George W. Bush will visit all the three places where al-Qaeda terrorists conducted their attacks five years ago. At first Bush will visit Ground Zero in New York. Afterwards the president will visit the Pentagon and complete the tour in Pennsylvania where another hijacked plane crashed. White House officials said that the president had no special speeches prepared for the ceremonies.

18:48
Bloomberg: Ukraine faces serious problems with the payment of external debt
17:52
Expert: UK and US tricked Poland with weapon supplies
17:05
Mirror: Putin's warnings about Sarmat are not exaggerated
16:38
Russian Defense Ministry reveals where Ukrainian army suffers greatest losses
16:24
Relations between Russia and Japan tumble down to zero
15:58
DPR may not execute British mercenaries
15:55
ASOS in its latest update mocks Russians because of the sanctions
15:23
Finnish FM: Trust between Moscow and the EU will be restored
14:40
Inflation in Italy reached its highest level in 36 years in June
13:35
Spiegel: Germany demands Lithuania to lift the ban on transit to Kaliningrad
World
Expert: New Ukrainian tactics creates problems for the Russian military