China dents the reputation of the Pentagon and CIA

China's nominal military capability is falling behind with that of the US by 6 percent only, according to research corporation RAND. The gap is expected to narrow

Last week saw the publication of excerpts from a “secret” report drawn for the director of US National Intelligence regarding China's military breakthrough in the last few years. There are a number of objectives behind the publication of the excerpts. Increasing budget allocations for the Pentagon and intelligence agencies could be one of them. The publication sent a warning to China with regard to steps required to ensure control over the yuan. It also struck a blow on the EU's plans for lifting their arms embargo on the People's Republic of China. The publication mirrors the stance of US government with respect to an increased level of Russia's activity in its relationship with China, and the possibility of coordinated actions taken by Russia, PRC, and India. 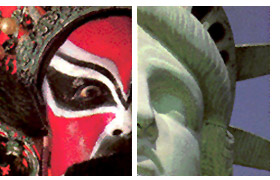 Aside from the above, “the Chinese factor” really worries Washington. Several important events took place prior to acknowledging the fact that the Pentagon and CIA actually “overlooked” China building up its military strength. For example, Asian version of Time magazine recently published an article saying that “more than 3,000 companies in the USA are suspected of spying for the benefit of China.” According to the magazine, those companies mostly operate in California, the bedrock of America's high-tech research and development industry. “China is making a big effort in developing military equipment so that it may compete against US-made equipment, and China will not hesitate before stealing our technologies,” a high-ranking source in FBI was quoted as saying by Time. Moreover, China began using regular tourists and businessmen for gathering data on the American technologies in the last few years, according to Time. Besides, American universities pose a potential threat owing to 150,000 Chinese students earning their degrees in the US at the moment. The latest spy scandal in the USA involved two Chinese nationals who were arrested after having sent computer components worth $500,000 to China. FBI says the components may be used for military purposes. In light of the above, US intelligence community is raising the alarm. According to the article published by Time, FBI had to recruit hundreds of additional personnel following the growing Chinese threat. FBI agents were assigned to every research center of the US Department of Energy. The financial cost of recent measures is high. Therefore, it would be great if more funds could be allocated. John Negroponte, former US Ambassador to Iraq, is the director of US National Intelligence. He is formally in charge of all 15 US national security agencies. The budget of the new department is in the neighborhood of $40 billion. Some sources indicate that the budget would amount to nearly $50 billion in a new fiscal year due to begin on October 1st, 2005. The Americans can spend huge funds well. The Americans are also good at finding reasons for more budgetary allocations for counterintelligence operations.

As by results of the RAND study, the United States presently holds 20% of the world's total capability while both the EU and China have 14 percent. India has 9 percent; Japan has 3 percent; Russia, Brazil, South Korea have a 3 percent share each. According to RAND, America's capability is expected to decrease after reaching its peak by 2015. The EU is expected to lose most of its capability by that time as opposed to China and India which are expected to grow stronger. US Secretary of Defense Donald Rumsfeld made a statement prior to the partial publication of the “Chinese report.” He said that he had some information showing that China was apparently spending much more on its military buildup than was officially declared by the Chinese authorities. Contrary to officially released figures pertaining to China's military expenditure (about $30 billion a year), the real sum is believed to amount to $40-45 billion a year. The research and development of modern arms is financed out of secret budget lines. As a result, China is rapidly catching up with its neighbors in terms of defense e.g. Russia, Japan, South Korea, India, and Taiwan. Japan is getting increasingly concerned about the development. Japan and China have been locked in a tough competition for political and economic control over the region. The relations between Japan and China are going from bad to worse. Taiwan has, without doubt, the biggest concerns about China's growing military muscle. Experts believe that today more than 700 tactical surface-to-surface missiles are deployed in China's southern provinces. The missiles are aimed at Taiwan. At least 120 missiles are added to the arsenal each year.

USA is taking more steps to boost its surveillance over China's growing military capability. The Pentagon is already using its military bases in Uzbekistan and Kyrgyzstan for “anti-Chinese purposes.” The governments of the above countries along with the Russian government have been repeatedly requested by the US to give a go-ahead on the deployment of AWACS spy planes on those bases. The US is also holding talks with Vietnam regarding a lease of the former Soviet navy base in Kamrang, a good location for monitoring southern areas of China.

Notwithstanding the above, the Pentagon analysts believe that the gap between the People's Liberation Army of China and the US armed forces is not narrowing at all. Instead, it keeps growing wider. The US military budget is more than 10 times greater than that of China.

Experts point out that the US military is taking the opportunity of testing new weapons and improving strategy and tactics while conducting real combat operations in Iraq and Afghanistan. On the contrary, the Chinese armed forces have not been involved in any hostilities since the end of the 1970s.

Meanwhile, the European Union is thinking up ways to lift the arms exports embargo on China. The Europeans imposed the embargo following the brutal crushing of student protests in Tiananmen Square in 1989. These days Beijing is stepping up its efforts to have the sanctions canceled. The Chinese already got support from the leading European countries including France, Great Britain, Germany and Italy. A few smaller European countries continue to oppose the move citing China's poor human rights record. USA strongly objects to the lifting of the embargo and threatens to impose serious restrictions on cooperation in the field of science and technology between the EU and the US should sanctions be lifted. Washington has fears about the Chinese taking advantage of arms exports in one way or another e.g. state-of-the-art military equipment including radar and missile guidance systems could be shipped to China after the removal of the embargo. However, there is some strong evidence showing that the EU and China may cut a deal till the end of this year despite US resistance. The lifting of the embargo will significantly improve Beijing's chances of military modernization.

China's economic growth has been quite impressive in the last ten years. Its GDP reached 1.4 billion of yuans, the country is the largest recipient of foreign investment among the developing nations, it is the world's sixth largest player in terms of foreign trade. According to investment bank Morgan Stanley, China now accounts for 4 percent of the global economy currently valued at $32 billion. As by generally accepted estimates, the consumer goods overstocking is huge in China. The goods are not necessarily cheap textile products, they are mostly high-quality household electronics, and they can glut any market in any country. Nowadays every third camera, every third air-conditioning unit, every third TV set on the world market are Chinese-made. China is gearing up for an important breakthrough in the area of science and technology, modern telecommunications and space technologies. No wonder the world's leading industrialized countries are beginning to raise serious concerns about the situation. The G-7 (excluding Russia) finance ministers and heads of central banks repeatedly asked China to raise an exchange rate of the yuan which is tightly pegged to the US dollar, thus the Chinese currency fluctuates along with the dollar. Chinese consumer exports grow cheaper on the international market as the yuan becomes cheaper. Many countries, especially the US, are unhappy about the trend. Some people even talk about the war between the dollar and the yuan. So far China has refused to take any steps to change the situation, it is unlikely to succumb to pressure mounted by foreign countries, especially by the US.

Washington is also watching closely an apparent increase in the development of relations in all areas between the three counties whose total populations account for half the world's population i.e. China, India, and Russia. The latest meeting between the foreign ministers of the three countries in Vladivostok was yet another example of the development. Politicians in Moscow, Beijing, and Delhi say that all-round cooperation between the tree countries is a guarantee of stability and predictability in full within the region, it is also a major contribution to international stability and predictability. The three countries committed themselves to protecting peace “all over the world” and promoting development of a multi-polar world which has no place for dominance, power pressure or terrorism. The Americans believe, and with reason, that the issues mentioned concern them since neither Moscow, nor Delhi, nor Beijing approves US foreign policy. At the same time Beijing is continuously watching any change of the international situation that might have an impact on China's security. The Chinese can anticipate that their country and the US are going to be the main geopolitical competitors of the 21st century. By and large, an invisible fight between the two nations have already started. The fight will come to light when the Taiwan problem is finally solved.

Someday the Taiwan problem will be solved, no doubts about it. Chinese officials say the government remains committed to its principles, it is reportedly making every effort to bring out peaceful reunification of Taiwan with the mainland. However, the Taiwanese authorities reject the offer from the PRC regarding reunification on the basis “one country - two systems.” Instead, they step up their separatist actions. The Taiwanese feel confident in doing so mostly because of the strong American backing. America has a commitment to help Taiwan defend itself should conflict break out. So far neither Moscow nor Delhi has dismissed China's plans of reunification through forceful action as unacceptable. In the meantime, the Washington foreign policy e.g. the US-led invasion of Iraq has been condemned almost unanimously.