Caracas could reconsider an anti-drug accord with Washington in reply 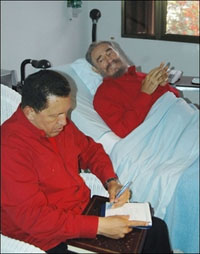 Washington has put Cuba and Venezuela on a par with “axis of evil” states after confirming its decision to open a special intelligence office for both Caribbean nations. In reply, Caracas said that it could reconsider an anti-drug accord with the US as President Chavez accuses the country’s oligarchy of being behind a Washington’s offensive to oust him.

Alter Washington announcment Venezuela and Cuba join the list of the countries that have been assigned so-called “mission managers,” who supervise US intelligence operations against them. There are only two other countries in the orld that reached such status: North Korea and Iran.

The Bush administration announced Friday it would appoint a ''mission manager'' for the two countries charged with developing strategies for key hot spots. The administration has said it has very little knowledge of events in Cuba, describing it as a closed society that keeps a tight lid on information. And it has had frosty relations with Venezuelan President Hugo Chávez, a Castro ally.

''Such efforts are critical today, as policy-makers have increasingly focused on the challenges that Cuba and Venezuela pose to American foreign policy,'' said a news release from National Intelligence Director John Negroponte's office.

As Cuba did not comment on the US intelligence offensive, Caracas said it could reconsider signing a counter-drug deal with Washington. According to the Caracas daily El Universal, Venezuela's Minister of Interior and Justice, Jesse Chacón, on Monday said the development could prompt a "re-evaluation of the accords we might sign with the United States.''

Earlier on Sunday, Chavez said in his weekly broadcast, "Hello, Mr. President," that Venezuela's oligarchy had joined with the US "empire" to oust him. "We are not going to allow the empire and its lackeys to return to the destabilization of 2002," said Chavez about the the coup that removed him from office for two days. "I call on movements that believe in democracy: do not do what you did in December, because it is part of the destabilization game," he said, referring to an opposition boycott of National Assembly elections.

"In Cuba, they talk about the post-Fidel era, and the death of Fidel. In Venezuela, they think about the fall of Chavez and about using elections to return to 2002," Chavez said. Chavez is a candidate for re-election in a December 3 vote, contested by Zulia provincial governor Manuel Rosales.