War Crimes: The case against Israel

The State of Israel is hereby accused of committing War Crimes in the conflict with Hezbollah IN Lebanon (July 12th to August 12th 2006). We present and document four counts where the Geneva Convention has been seriously breached. 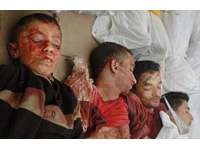 War Crimes: The case against Israel

Presenting an article of this type involves running a gauntlet of death threats and hacking attacks, which appear on cue normally two to three days after the document is published. However, this is not an opinion article, neither is it an unwarranted attack borne through hatred. It is objective and it is fact: The case against Israel.

Geneva Convention IV, Relative to the Protection of Civilian Persons in Time of War of 12th August 1949, Part I General Provisions, Article 3 states:

In the case of armed conflict not of an international character occurring in the territory of one of the High Contracting Parties, each Party to the conflict shall be bound to apply, as a minimum, the following provisions:

(1) Persons taking no active part in the hostilities, including members of armed forces who have laid down their arms and those placed hors de combat by sickness, wounds, detention, or any other cause, shall in all circumstances be treated humanely, without any adverse distinction founded on race, colour, religion or faith, sex, birth or wealth, or any other similar criteria.

To this end the following acts are and shall remain prohibited at any time and in any place whatsoever with respect to the above-mentioned persons: (a) violence to life and person, in particular murder of all kinds, mutilation, cruel treatment and torture;

Article 10: The provisions of the present Convention constitute no obstacle to the humanitarian activities which the International Committee of the Red Cross or any other impartial humanitarian organization may, subject to the consent of the Parties to the conflict concerned, undertake for the protection of civilian persons and for their relief.

Article 18: Civilian hospitals organized to give care to the wounded and sick, the infirm and maternity cases, may in no circumstances be the object of attack but shall at all times be respected and protected by the Parties to the conflict.

Article 24: The Parties to the conflict shall take the necessary measures to ensure that children under fifteen, who are orphaned or are separated from their families as a result of the war, are not left to their own resources, and that their maintenance, the exercise of their religion and their education are facilitated in all circumstances. Their education shall, as far as possible, be entrusted to persons of a similar cultural tradition.

In attacking civilians indiscriminately by deploying munitions against their homes, by strafing civilian vehicles and by deploying cluster bombs near hospitals, the Israeli Armed Forces did not provide humane treatment for persons not taking part in hostilities. The purposeful deployment of munitions against civilian structures, the most blatant of which was the attack on the Beirut power station, constituting an act of environmental terrorism, occasioned violence to life and person and acts of murder.

Humanitarian agencies were not free to circulate because the IDF refused to respect humanitarian corridors, apart from which munitions were deployed against hospitals and even ambulances and funerals were fired on.

Not only were no measures taken, the children in question were slaughtered in their homes.

As we all know, presenting legal cases in this day and age against certain states is an academic exercise because the execution of the law is made under the current New World Order by those who break it. (cf. Case of Slobodan Milosevic, illegally kidnapped and detained before his death under illegal custody after the proper provisions to guarantee his health were disregarded). In short, international law has been hijacked by a clique of criminal states who use and abuse international norms as they wish, the epitome of the unilateralist approach.

Any attempt to bring Israel to the rule of law must necessarily include full mention of the atrocities perpetrated by terrorist organizations also against Israeli civilians and in the cases above it must be stressed that these war crimes perpetrated by Tel Aviv were in retaliation to acts of terrorism.

Finally, so long as Israel continues to occupy territories outside those allocated to it by the UNO in 1947/8, it continues to feed the fires of terrorism and to give a cause to those who rightly oppose this illegal occupation, however wrong it is to commit acts of violence against persons and property.