The British prime minister is trying to save his face at negotiations with George W. Bush in Washington

British Prime Minister Tony Blair arrived in Washington Tuesday with a two-day visit. The meeting with President Bush was devoted to the forthcoming G8 summit in July. The politicians particularly touched upon the question of financial aid to Africa and the struggle against the environmental pollution. London needs to win Bush's support so that Blair's suggestions could be accepted at the summit in Scotland. The US administration does not really welcome the British initiatives, though. George W. Bush stated last week that he was not ready to support the British premier without receiving any political guarantees in return. 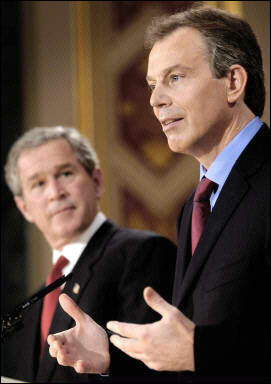 An official Downing Street representative tried to underestimate expectations from the upcoming talks, saying that the meeting in Washington would simply be a work meeting to exchange opinions on important international issues. Nevertheless, British journalists believe that Tony Blair has a right to hope for special relations with the US administration, taking into consideration the 100-percent support, which Great Britain gave Bush during the US-led crusade in Iraq. The meeting will particularly unveil the USA's attitude to Mr. Blair after the Iraqi campaign.

Great Britain chairs the G8 summit in 2005, the informal organization of eight industrially developed countries (Germany, Italy, Canada, Russia, the USA, France, Great Britain and Japan). The annual G8 summit is slated to take place on July 6-7th in Scotland. London will be in charge of the two-day agenda: Blair determined basic subjects for the discussion in the middle of May. They particularly include financial help to Africa and measures to prevent from global warming.

Within the scope of help to the African continent, Mr. Blair suggested wealthy states should assign $25 billion during the upcoming ten years and write off 100 percent of debt to 20 poorest countries of the African continent. In addition, the ambitious plan includes the establishment of the international financial mechanism – to issue special securities, the profit from which could increase the help to third world countries.

The idea to write off the African debt found the universal support among world-known European and American celebrities. A grand live show will take place in UK, France, Germany, Italy and the USA on July 2nd, 2005. Mega music stars such as Elton John, Paul McCartney, Madonna, Mariah Carey, Britney Spears, Dido, U2, Coldplay and many other artists will perform at the show. The show is said to be broadcast live in dozens of countries of the globe.

According to the British Prime Minister, the struggle with the global warming should become the second most important subject of the G8 meeting in Scotland. The issue of the Kyoto Protocol is expected to become a separate subject of discussion along with the question about the restricted emission of greenhouse gases in the Earth's atmosphere. In addition, Blair suggests discussing the development of peace processes in the Middle East, the situation in North Korea, Iran, Afghanistan and the question about the reform of the UN Security Council.

Tony Blair toured the countries of the Group of Eight to approve the agenda of the coming summit. Rome became the first city of Blair's itinerary. According to expectations, Blair received the total support from the head of the Italian government, Silvio Berlusconi. The British prime minister is to visit Moscow during the second half of June to have a personal meeting with President Putin. The tour will end in France and Germany: negotiations with Canadian and Japanese prime ministers will be conducted in the form of a video conference.

The USA will obviously become the most complicated partner for London, from the point of view of the agenda of the forthcoming summit in Scotland. Spokespeople for the US administration said last week that they were not going to take part in Blair's ambitious plan to increase financial help to Africa. US officials specified that assigning considerable funds to Africa did not fit in the USA's budgetary plans. Nevertheless, Washington intends to assign $674 million of humanitarian aid to Africa's poorest countries, according to reports from American media. According to the grand plan of the British leader, however, the USA is supposed to sacrifice three times as much during the coming ten years.

Spokesmen for the Bush's administration said that they were not going to double or triple the financial help. Furthermore, the USA will not forgive the debts of 20 African states until the governments are reformed and corruption is rooted out there. George W. Bush stated that the USA would not help the regimes, which violate human rights and restrict freedoms and democratic principles.

Tony Blair finds himself in a very uncomfortable position because of the USA's unwillingness to welcome London's suggestions. Bush's reaction to Blair's plan will undoubtedly become a political blow on the US strategic ally.