“I feel very happy” said the Communist leader in a statement published in the local media. 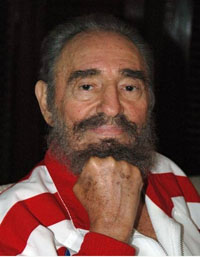 The Cuban newspaper Juventud Rebelde (Rebel Youth) Sunday published three new pictures of a healthy Fidel Castro to celebrate his 80th birthday and erase any doubt that he made it thorugh major surgery. In the first post-operative photos, Castro is resting in a bed wearing sports clothes. In one of them he is reading the Granma daily and another one shows him at the phone.

Photos were released with a statement from the revolutionary leader, in which he vowes to fight for his health and thanks the good wishes coming from leaders and personalities from all over the world. "I feel very happy", told Castro to Juventud Rebelde newspaper, where he appears alert and in good spirits and did not appear to have lost much weight after the operation to halt gastrointestinal bleeding.

"For his 80th birthday, the commander-in-chief Fidel Castro sends a reassuring message about the state of his health, which has considerably improved," said Juventud Rebelde."I tell all those who wished me good health that I will fight for it," Castro said in the statement. "The country is moving forward and will continue moving forward perfectly well," Castro added.

It is the first time in 48 years that Castro marks his birthday away from his regular durties as head of the Cuban Government, leader of the Communist Party and Commander in Chief of the Revolutionary Armed Forces of Cuba. Castro ceded powers on his brother Raul Castro, 75, after he underwent emergency surgery on July 31.

Raul Castro, in turn, made a brief public debut as communist Cuba's leader, welcoming Venezuelan President Hugo Chavez to mark ailing Castro’s birthday. No audio was registered as Raul Castro greeted Chavez and a crowd that met to welcome the Venezuelan leader.

In Caracas, a brief statement from Chavez's office said the Venezuelan leader had a "private meeting" Sunday afternoon with Raul Castro and Vice President Carlos Lage, adding that Chavez heads to Jamaica on Monday for a meeting with Prime Minister Portia Lucretia Simpson-Miller.

Russian President Vladimir Putin hailed Castro as one of the most "brilliant" political leaders of his era, in a special birthday message. "In Russia, we know you well as one of the most brilliant and authoritative political men of current times," Putin said in a telegram, according to the Kremlin.

On the contrary, Washington insisted in its attempt to end with Castro’s regime. "The Cuban people deserve the right to choose their own government," a US State Department spokesman, Justin Higgins, said.