Carlos Mesa offered his resignation to the Congress for the third time in three months; this time for good

Bolivia's President Carlos Mesa offered his resignation to the Congress for the second time in three months, and after three weeks of angry street protests demanding the nationalization of the country's natural gas reserves. Mesa's resignation will be effective as soon as the National Parliament accepts it and its head, Hormando Vaca Diez, should take office as second in the succession line, but this cannot be yet confirmed. 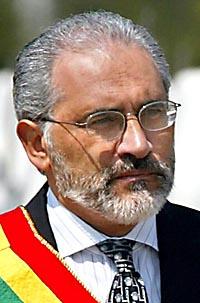 "It is my responsibility to say that this is as far as I can go," the president said on national television. "For that reason my decision is to offer my resignation from my post as president of the republic." Mr Mesa served as president for 20 months, after his predecessor, Gonzalo Sanchez de Lozada, was pushed from office, also by demonstrations over Bolivia's gas reserves.

Mesa's resignation came after a last minute mediation headed by the local Roman Catholic Church failed. Earlier in the day, Mr Mesa was forced to flee his office as protesters threatened to overwhelm police guarding the presidential palace.

An estimated 80,000 people, including Quechua and Aymara Indians, poor farmers, teachers, unionists and miners, surrounded the presidential palace and the nearby Congress on the capital's main square.

The leader of the center-left opposition, Evo Morales, confirmed in a statement that his Movemento to Socialism party, will support a constitutional solution to the institutional crisis. In this sense, Morales also demanded the resignation of the Congress leader, Vaca Diez and the President of the lower chamber, leaving the power in the hands of the head of the Supreme Court of Justice, who should call on earlier elections.

Morales also blamed the International Monetary Fund and the World Bank for the austerity plans that have left Bolivia on the brink of chaos.