Yushchenko’s supporters will join the coalition with Yanukovich

The Our Ukraine faction has made the decision to join the National Unity Coalition. This was announced by the head of the information department of Our Ukraine Tatyana Mokridi. The conference with the Our Ukraine faction lasted over three hours, during which two issues were discussed: the inclusion of the faction in the coalition and the support of Victor Yanukovich’s candidature for the post of prime minister of the country. 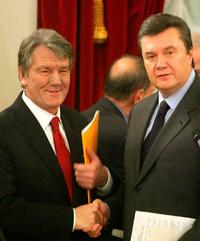 Yushchenko’s supporters will join the coalition with Yanukovich

A very lively discussion took place regarding the inclusion of the faction in the National Unity Coalition. A decision was made for Our Ukraine to become a member of the coalition based on a majority vote. Mokridi also announced that the faction had decided on the free voting of national deputies on the candidature of the Prime Minister, informs RBK.

Yulya Tymoshenko has refused to sign the Universal of National Unity. She declared this during the round-table conference.

“Our political force will not call this document a Universal, but a political act of capitulation of the Orange forces. We are becoming a parliamentary opposition,” said Tymoshenko. She criticized the document for the fact that the phrase “only state language, Ukrainian” had disappeared from its text and for the position on the creation of a single Orthodox Church.