And so, it seems that the political crisis in Ukraine has come to an end. At the very last moment, president of Ukraine Victor Yushchenko decided to agree with the proposal of the Supreme Rada to introduce Victor Yanukovich into parliament for approval as candidate for the post of head of the government. Although the previous day most observers were led to believe that the dissolution of parliament and secondary elections for the Rada were inevitable, the disagreements regarding the Universal of National Unity proposed by Yushchenko were too great. Strictly speaking, for the past two weeks, the arguments between the president and the Anti-crisis Coalition have mostly come down to who will make big concessions. 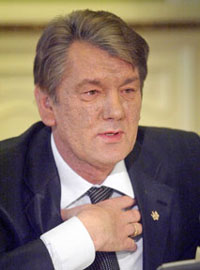 The Universal, of course, does not remotely imply national unity. How can there be unity when most inhabitants of Ukraine are against the country’s entry into NATO and in the agreement proposed by Yushchenko this aim is presented almost as the main one where external state politics are concerned? The same can be said about the status of the Russian language, the amalgamation of the Orthodox Churches and the federalization problem. It is worth noting that having announced that an agreement had been reached, Victor Yushchenko did not say a single word about how the Universal was signed, that is to say, whether the Anti-crisis Coalition agreed with his propositions. It is true that the president of Ukraine promised to make a special address, in which he will explain the essence of internal and external Ukrainian politics for the coming years.

However, Victor Yushchenko praised himself greatly. Having announced the decision to introduce Victor Yankovich’s candidature for the consideration of the parliament, the president called this a most important step. Victor Yushchenko especially emphasized that he had made this decision independently and that it was based exclusively on the unification of Ukraine. “I ask the nation to relate to this decision with understanding. I understand all the complications that this decision presents, both in the East and the West of the country. We have a unique chance to bring together the two banks of the Dnepr,” Yushchenko said.

It’s true that this sounds as though Yushchenko is also apologizing before the inhabitants of West Ukraine, where Yanukovich is categorically rejected… It is curious also that the president practically admitted that the country is divided into East and West. Although who can be more to blame for this division than the Ukrainian president himself?

Now Yushchenko is calling for the Rada to move on from the regime of political war and unite Ukraine. In the opinion of the head of the government, it is essential to move onto political tolerance and talk about aims which unite rather than divide them.

“I think that parliament will use this chance for the well-being of the nation,” added Yushenko. Today, the president will offer his hand to parliament, meet them and present an opportunity. “We have every possibility of discussing the transition from a political depression to the stabilization of the political system and the economy,” he said.

He also drew attention to the necessity of answering the question of how to form a country with a united Orthodox Church, how to show at least the beginning of political tolerance for the sake of the country and how to give the Ukrainian parliament a chance to genuinely assimilate lessons on a parliamentary system.

The most interesting question now is how long the Yushchenko-Yanukovich tandem will last. On the one hand, such a union is beneficial to the president of Ukraine. In the opinion of the deputy of the State Duma Konstantin Zatulin, the confirmation of Victor Yanukovich as head of the government will allow Yushchenko to transfer part of the responsibility for events that take place in the country onto him. On the other hand, some believe that in the long run, serious contradictions could arise between Yushchenko and Yanukovich regarding external and internal political policies. If Yanukovich goes along with the president’s politics, this will inevitable lead to the weakening of the party of regions. But if he does not, a confrontation between the head of the government and the head of the state will be unavoidable.