As Fidel Castro recovers from a stomach surgery that will keep him temporarily away from his regular duties as the head of the Cuban State, Chief of the Revolutionary Armed Forces, and leader of the Communist Party, his brother Raul begins the sucession and the population in the Caribbean Island is eager for news on the health of the country’s octogenarian strongman but remains in calm. In the meantime, Latin American and Spanish governments wished Castro a speedy recovery, but foes of the last Communist leader of the western hemisphere make plans for what they call “a democratic transition”. 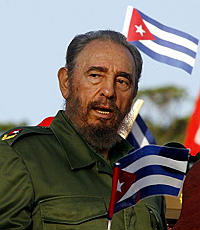 Castro said on Monday that he underwent surgery and had temporarily handed over his power to his younger brother Raul Castro, who is the nation's defense minister. On Tuesday, a TV presenter read another Castro’s statement saying that he was “stable” and getting better from the surgery.

“Given Cuba 's specific situation and designs against it by the US empire, my health becomes a state secret," he said. The communist stalwart said he was "in perfectly good spirits" but hinted he was not out of the woods yet. "All I can say is that the situation will remain stable for several days before a verdict can be reached," said Castro.

As Miami-exiled Cubans await news on Castro’s health condition the United States is warily monitoring the provisional transition in Havana, confident that it can assist dissident groups in Cuba and head off any mass exodus from the island. Many anti-Castro leaders in the US, believe he is “seriously ill or already dead”, as Republican Congressman Mel Martinez made public this week.

The White House made it clear yesterday that it did not think Raul Castro, 75, would improve conditions in Cuba or relations with the United States. There were no plans to negotiate until Communism falls in the Island.

The one thing that this president has talked about from the very beginning is his hope for the Cuban people finally to enjoy the fruits of freedom and democracy," White House spokesman Tony Snow said. "And for the dictator, Fidel Castro, to hand off power to his brother, who's been the prison keeper, is not a change in that status."

Overshadowded Raul Castro is a hard-liner Communist who, according to historians, was in charge of the dirty job in Castro’s regime. Along with Fidel, he is the only survivor of the old-guard of young revolutionary militants that toppled Batista’s conservative dictatorship in 1959. Che Guevara and Camilo Cienfuegos died in unclear episodes few years later.

Raul was also the one in charge of the contacts with the Soviet Union and had a key role in the summit between Fidel and the former Soviet leader, Nikita Khruschev.

"We wish with all our heart for Fidel Castro to recover as soon as possible so he may be with us forever," said Chavez, who has often said that he considers Castro as a friend. "We are sure that with the strength he has shown throughout his exemplary career, Castro will overcome this new challenge to continue in the trenches of the anti-imperial struggle," Bolivian President Morales said in an open letter addressed to Castro.

"In the name of friendship and the struggle that united us -- that for development and equality between peoples -- I wish to send you (Castro) our prayers for quick recovery," said Brazil 's Lula. "I am expressing here my personal sentiments, that of my government and that of your many friends in Brazil," he said.