The official opening of the Baku-Tbilisi-Ceyhan (BTC) Oil Pipeline, destined to transport Caspian oil to the West, had a place on Wednesday in Baku, Azerbaijan. 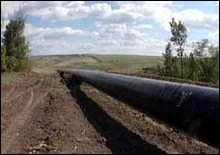 This event will put an end to a decade of political struggle around this pipeline. Besides this inauguration means that the states of Caucasus and Central Asia are entering into the period of a serious change, which can bring another wave of “color revolutions”, writes Kommersant daily.

Four presidents took part in the ceremony. The Turkish leader Ahmet Necdet Sezer was the only guest who had taken part in the ceremony of inauguration three years ago. The Kazakhstan's president Nursultan Nazarbayev made a historic statement: Astana is connecting to the BTC pipeline. So far Kazakhstan had the agreement with Azerbaijan about pumping 20 million metric tons through the pipeline. But the annual throughput capacity of BTC is estimated 85 million metric ton. Since the oil extraction in Azerbaijan is expected to decrease in the nearest future, Kazakhstan's joining the project has become necessary, if only to recompense the costs of the construction за the pipeline. Nursultan Nazarbayev promised that his country would step up oil output up to 100 million metric tons by 2010, and to 150 million by 2015.

The most cheerful guest on the inauguration ceremony was the Georian president Mikhail Saakashvili. He uttered that the BTC pipeline would make “the whole region, including Georgia, entirely independent”.

The commercial functioning of the pipeline will begin by the end of this year; in the nearest months it will be filled with oil. From now on the Caspian nations are directly linked to the West-centered world-economy. The oil which will be pumped through the BTC pipeline is being extracted by the Western oil giants. The commander-in-chief of the U.S. forces in Europe, general James Johns has already disclosed the U.S. plans to deploy the so-called “Caspian Guard” along the pipeline.

As the oil flows westward, the spirit of the “color revolutions”, the series of coups d'etat installing staunchly pro-Western puppet regimes, will penetrate further eastward. And the most probable targets are Azerbaijan and Kazakhstan.