Official results give conservative Felipe Calderon a razor-thing margin of 0.57 percentage over his leftist opponent, who will challenge the vote counting in courts. 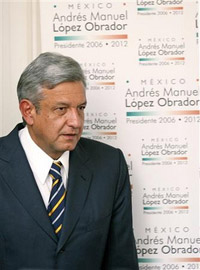 Mexico’s leftist candidate Andres Manuel Lopez Obrador said on Thursday that his Party of the Democratic Revolution (PRD) will challenge in courts official results that have declared his conservative opponent from the ruling National Action Party (PAN) winner in the tight presidential election. According to the Federal Electoral Institute Calderon won the country’s presidential race by a razor-thin margin, as he had 35.88 percent and a lead of 236,006 votes, or 0.57 points, over former City Mayor Lopez Obrador.

As soon as results were posted, Lopez Obrador claimed the electoral process was marred with irregularities and announced that his party will contest the outcome of the elction in court and requested a manual recount of the 41 million votes. "We have taken the decision to challenge the electoral process," said Lopez Obrador. "We have triumphed and this is what we will demonstrate to the tribunal," he said.

Meanwhile, supporters of Calderon celebrated the official results as their leaderinsisted the votes had been counted and verified and that there was no need for a recount. "Now is the time for conciliation," Calderon said as the Mexican stock exchange also celbrated by jumping over three points.

In an attempt to put pressure over the members of the electoral tribunal, which is the final arbitrer of electoral disputes and must validate the outcome of the vote by September 6, Lopez Obrador and other prominent PRD’s members asked supporters to mobilize against fraud. The call for a rally in the Zocalo square, which can hold over 100,00 people, raised fears of rowdy street protests and further turmoil among observers.

The PRD and most of the Mexican toyling masses that clearly support Lopez Obrador have been wary of election fraud since a 1988 presidential vote they lost, almost certainly due to government manipulation of the vote count to help its own candidate. By that time the candidate and founder of the PRD party Cuhautemoc Cardenas won the elections, but the well organized fraud system masterminded by the then-ruling PRI Party allowed his conservative opponent Carlos Salinas de Gortari to take over presidency.

Despite the official results posted, neither Washington nor Latin American or European Governments have congratulated Calderon. They will probably wait for the official announcement by the electoral tribunal, expected for the first week of September. But that’s too long for today’s tense political mood in Mexico.