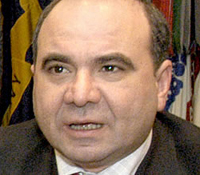 Georgy Zhvania, a brother of the late Georgian prime minister, unveiled sensational details relating to his brother's death. Speaking to a TV station 202, he said that after conducting his own investigation he was convinced that the state prosecutors had either showed inadequate professionalism or deliberately concealed information pertaining to Mr. Zhvania's death.

The official version says that Mr. Zhvania died due to carbon monoxide poisoning on February 3rd, 2005. He and his friend Raul Yusypov were found dead in Mr. Yusupov's apartment. Georgia's minister for police and public security matters Vano Merabishvili spoke about the carbon monoxide poisoning soon after the bodies were found. According to him, it was an accident caused by malfunction of an Iranian-made heater installed in one of the room. Mr. Merabashvili said he had looked at the scene of the accident himself. He believed both Mr. Zhvania and his friend had died instantly after inhaling a large amount of carbon monoxide exhumes. The victims' relatives doubted the natural cause of death of the diseased from the very beginning. They asserted that Mr. Yusopov had never owned the apartment where the bodies were found. However, Georgia's prosecutors concluded that the carbon monoxide poisoning had been the only cause of death and all the examinations had reportedly supported their conclusions.

FBI specialists carried out a forensic examination in the apartment where Mr. Zhvania had reportedly stayed at the night of the accident. The examination shows that an improperly installed gas heater could not cause the death of Mr. Zhvania in the above apartment. “On the contrary, the Georgian translation of the FBI inquiry says that an improperly installed gas heater could be the cause of death of Mr. Zhvania,” claims Georgy Zhvania.

Georgy Zvania points to some details indicating that Zurab Zhvania did not die in the apartment of his friend where the bodies were found. “Judging by the scenery of the place, Zurab Zhvania and Raul Yusupov did spend some time in there playing backgammon, eating some food, drinking brandy, but their fingerprints are missing in the apartment,” said he. The matter could be brought to a close in a simple and timely manner should the prosecution be interested in doing so, but the prosecution does not seem to be interested at all, according to Georgy Zhvania.

“I am planning to file a request to the European Union for an independent inquiry into the death of the Georgian prime minister,” said Georgy Zhvania. Both the press service of the Georgian President Saakashvili and the General Prosecutor's Office refused to comment on any allegations or information relating to the death of Zurab Zhvania.