There is a conflict going on between the head of the Ukrainian government, Yulia Timoshenko, and the team of the nation's president, Viktor Yushchenko. The latter found himself personally involved in the conflict, which occurred as a result of the fuel crisis in Ukraine. 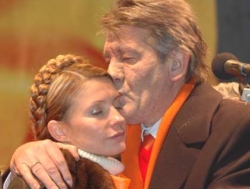 The growth on the fuel prices started in Ukraine in the beginning of the current spring. One may not say that it is a purely Ukrainian feature only – Russia has the same problem too, although fuel prices do not skyrocket in Russia.

Yulia Timoshenko's attempts to affect the situation did not bring any positive changes. The Ukrainian prime minister used a usual administrative method and set limits for fuel prices. Petrol disappeared from Ukrainian gas stations as a result. Furthermore, there were special restrictions introduced at the stations – to sell not more than 10 liters for one car, etc.

Yulia Timoshenko was blaming Russian oil suppliers for the crisis, saying that they were selling petroleum products to Ukraine at prices that were higher than the world level. Timoshenko also claimed that Russian companies conspired against Ukraine to restrict their deliveries to the country.

The situation quickly went out of control in Ukraine, while Timoshenko was squabbling with oil companies. President Viktor Yushchenko interfered in the conflict. Yushchenko signed a decree to introduce certain changes to several laws of Ukraine about the stabilization of prices on the market of petroleum products. Viktor Yushchenko's interference in the oil conflict did not help Ms. Timoshenko at all. Yushchenko suggested Timoshenko should resign from the position of the Ukrainian prime minister, Kiev's weekly Zerkalo Nedely wrote.

The newspaper cited the statement from an anonymous authorized representative of the prime minister: “Yulia Timoshenko disagreed with the first part of the president's decree, in which the government's activity to regulate the crisis was regarded as non-market. The president, in his turn, apologized to Russian oil-traders for the actions of the Ukrainian government, which did not let them work in Ukraine. Yushchenko added that the Ukrainian government was the worst in Europe. Furthermore, he said that he shouldn't have appointed Timoshenko on the position of the national prime minister,” the source said.

”Viktor Yushchenko urged Russian companies to act like partners with Ukraine and not to cause fuel crises every time before the start of the sowing campaign. The president also said that the government had used non-market levels during the critical situation. Yulia Timoshenko, however, said that she strongly disagreed with the presidential decree. She stated that the government was doing everything properly. The president did not go into details, and asked Ms. Timoshenko to withhold such public comments that revealed dissociation in the team. Timoshenko only repeated that she strongly disagreed with the president's estimation of the situation,” the source added.

”She emphasized her disagreement for the third time after another remark from Yushchenko. In addition, Timoshenko thanked Ukrainian and Tatar companies and said that she was going to have a separate conversation with Russian oil traders,” the newspaper wrote.

Yulia Timoshenko dared to criticize president's decisions in front of foreign guests. In this case Yushchenko simply told the prime minister that she could sign in her resignation and leave.

It is noteworthy that both President Yushchenko and Prime Minister Timoshenko hurried to reject the information about the forthcoming resignation of the Ukrainian Cabinet of Ministers. Yushchenko particularly said that the gas crisis became a lesson for the government of Ukraine, whereas Timoshenko said that the rumors about her resignation were all untrue.

Timoshenko's press secretary, Vitaly Chepinoga, said in an interview with the Echo of Moscow radio station that Yushchenko's words about the resignation of the prime minister had been misinterpreted. “The president said that we were working in a single team, which makes discussions possible only when a certain decision is being discussed. There can be no discussions made during the decision-making process, and those who disagree can sign in their resignations. This was what the president said. Yushchenko was addressing not only to Timoshenko in particualr, but to the team on the whole,” the press secretary said.

Yulia Timoshenko will apparently remain on her position for a while. On the other hand, her work on the position has been accompanied with big and small scandals during less than six years of its work. It is noteworthy that spokespeople for the Ukrainian administration mention the word combination  “a single team” too often, which most likely means that there is no such team like that at all.

On the photo: Yulia Timoshenko and Viktor Yushchenko