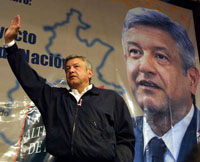 After being knocked down from the World Cup by Argentina, Mexicans have little to do but to get ready for Sunday presidential elections. According to all opinion polls, the leftist leader and former Mexico’s City Mayor, Andres Manuel Lopez Obrador, leads by a narrow margin followed by conservative ruling party candidate Felipe Calderon and Roberto Madrazo from the traditional PRI party well behind the two front runners.

The campaign has lost some its attraction for voters, as candidatestried to mdoerate their verbal battles of the recent weeks after being adverted by the national electoral council. However, it is expected that the leading candidates will renew their attacks ahead of Sunday’s vote since nothing has been decided yet.

As a proof of that, the conservative candidate Calderon warned on Sunday his leftist rival would cast Mexico into a "horror movie" of debt and division. Felipe Calderon's attack, labeling front-runner Andres Manuel Lopez Obrador a divisive free spender who threatens national stability and even Mexico's young democracy, set the tone for a final week of campaigning in this close and bitter contest.

"We've seen this movie before," Calderon told as many as 100,000 supporters at Mexico City's giant Azteca football stadium. "It's a horror movie that cost Mexicans dearly."

Lopez Obrador, the former Mexico City mayor who had long been seen as the presidential favorite, did not reply to Calderon’s attack. He has concentrated his campaign making appeals for his promises to lift up millions of poor people by ending two decades of free market reforms, boost welfare programs and create jobs with ambitious public works projects.

In the meantime, Roberto Madrazo, the candidate of the traditional PRI party that ruled Mexico for 71 years, said he still has chances to win on Sunday, thanks to the widespread structure of his party. “We have a moderate centrist proposal for our voters as our party has dropped its pro-market program of the nineties and got closer to the Social democratic parties of Europe”, told Madrazo in a TV interview recently.

PRI leaders trust the election will be split in thirds and that could be an advantage for their party, which is the best structured across this 80 million Latin American nation. However, observers believe the election will be polarized between the Lopez Obrador and Calderon.