In Brazil, leaders from both regions – including presidents of Iraq and Palestine - signed a joint declaration which Israel and the United States tried to boycott

In Brazil, leaders from Latin American and Arab nations – Iraq and Palestine were represented by their respective presidents - sealed on Tuesday an historical document which asserts the right to resist foreign occupation of sovereign states. The draft final document of the “Declaration of Brasilia,” which condemns Israel's occupation of Palestinian territory, asserts the right of people to resist foreign occupation, demands that Israel dismantles settlements and withdraws to its pre-1967 borders, calls for the creation of an independent Palestinian State, denounces terrorism but calls for a global conference to define the meaning of a terrorist. 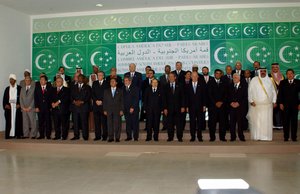 The summit was actively promoted by Brazil’s President Luiz Inacio Lula Da Silva, in an attempt to approach both regions linked by cultural ties, but historically unconnected in political and economical terms. Despite the meeting was “against nobody”, Israel and the United States made public their dislike and closely followed events.

In the statement, the two regions demand that Israel, whose strategic ally is the United States, disband the illegal Jewish colonies in Palestinian areas, including “those in east Jerusalem.” Additionally, the declaration demands negotiations between Argentina and the United Kingdom about the sovereignty of the Falkland Islands – or Islas Malvinas, according to the Argentine denomination - on the basis of the UN resolutions which are favourable to the South Americans.

The declaration also lashes out at US economic sanctions against Syria and denounces terrorism, but also calls for a global conference to define the meaning of terrorist, in a clause that, according to the Arab side, was a clear reference to Israeli and American criticism of anti-Israeli occupation groups like the Palestinian Hamas and Lebanon's Hizbollah.

Israeli groups as the Simon Wiesenthal Center condemned the declaration which, according to its spokesmen legitimates terrorists.

Brazilian Foreign Minister Celso Amorim said that “terrorism is condemned in a clear manner,” but with regard to the paragraph relating to the right of resistance, “each party will read it as they understand it.” In another jab at Israel, the declaration reaffirms “the importance of the accession of all countries of the region without exception to the Nuclear Non-Proliferation Treaty (NNPT) and the placement of all their nuclear facilities under comprehensive IAEA safeguards,” referring to the International Atomic Energy Agency.

The document supports international efforts, including the UN-adopted Middle East “roadmap” peace plan. The two sides also stressed the need to respect the “unity, sovereignty and independence of Iraq and of not interfering in its internal affairs.”

As for Washington, hawks are uneasy. The White House is scared of an emerging geopolitical axis on the map - Arab-South American. It's non-aligned. And it's swimming in oil. Between them, Saudi Arabia, Kuwait, Iraq, the United Arab Emirates, Algeria, Egypt, Qatar, Libya, Oman, Syria, Yemen, Venezuela, Ecuador, Argentina and Brazil pump about 27.2 million barrels of oil a day, about 32.5% of global production.

On the photo: Leaders of South America and Arab nations met in Brazil last weekend