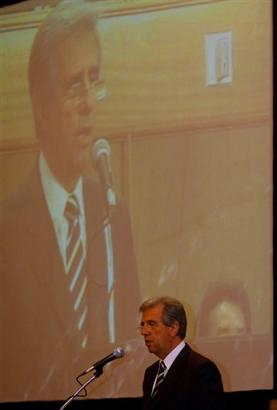 The elections brought a new setback for conservative parties, which had lost control of the Capital long time ago but had firmly retained power in the rural interior of this South American nation. "The political map has changed completely," several political analysts agreed after the EP-FA-NM and the National Party (PN) staged a hard electoral dispute for the mayor's offices in several departments.

Accoding to Uruguay's Election Court, apart from Montevideo, leftwing forces won municipal elections in the provinces of Canelones, Salto, Rocha, Florida, Paysandu, and Treinta y Tres, with the last two as former historic strongholds of the conservative PN. Elections left the conservative Coloured Party, which controlled country's politics for 170 years before leftist victory in October 2004, as the third force without any significant presence in most of country's departments.

Sunday's victory means an extraordinary ratification of the turn to left in Uruguay and a strong support to the President and its ruling coalition formed by Communists, Socialists, moderates and former guerrilla leaders. Analysts commented that the seven of the 19 contesting departments in which the EP-FA-NM won comprise 75 percent of the Uruguayan population with the highest Gross Domestic Product.

In Montevideo, progressive Ricardo Ehrlich, a scientist who was imprisoned during the 1973-85 dictatorship for his involvement in the National Liberation Movement, won with over 60 percent of votes. Montevideo holds half of country population (1.5 million inhabitants) and explains over 50% of the national income.

It is also the first time that the progressive block obtains local governments outside Montevideo.