Bush apparently liked the welcoming music show: the US president even tried to dance to the tune of the Georgian music

George and Laura Bush arrived in the capital of Georgia, Tbilisi, on Monday night. Georgian President Mikhail Saakashvili, the chairwoman of the Georgian parliament, Nino Burjanadze, Prime Minister Zurab Nogaideli, members of the Georgian government and parliament met US VIP guests at the airport of Tbilisi. 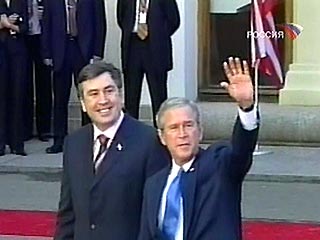 Two Boeing planes landed in Tbilisi: the first plane delivered three identical armored vehicles for the American president, who arrived shortly on another Boeing afterwards. It is noteworthy that local authorities closed the air space of Georgia in the expectation of the US president. Georgian law-enforcement agencies and special services toughened security measures in the whole city.

After the hearty welcome at the airport, George W. Bush and his wife went to Tbilisi's historical center, on Maidan Square, where the American guests were offered to see the concert of Georgian folklore ensembles.  There were no local residents seen in the area, where the music show was held: special services warned the people not to leave their homes and even not to look out of their windows in an attempt to see the US president.

George W. Bush apparently liked the show: the president even tried to dance to the tune of the Georgian music.

The US president's visit to Georgia caused unbelievable public excitement in the capital of Georgia, Tbilisi. George W. Bush is expected to deliver a speech to the Georgian nation on Svoboda Square at 2 p.m. Moscow time. A crowd of people gathered on the square wishing to listen to the American leader. Thousands of local residents broke through the barriers and metal detectors and made their way to the city's central square, waiting for George W. Bush to appear at the tribune.

Special agents and police officers of Georgia could not resist the crowd of people, who wished to enter Svoboda Square. The security eventually had to remove the barriers and let the people flow in without any inspection. About 10,000 people are currently waiting for the American president on the square, RIA Novosti reports.

Five hundred and sixty-four Georgian singers, dressed in national costumes of white, blue and red colors, are to sing the anthems of the USA and Georgia after the presidents of the two countries finally arrive on the square.

The program of Bush's official visit in Georgia includes talks with the chairwoman of the Georgian parliament, deputies and spokespeople for the local opposition.