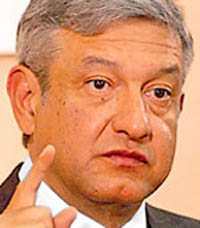 Mexican leftist candidate Andres Manuel Lopez Obrador has retaken a lead in the local presidential race after losing the first position to his conservative opponent Felipe Calderon one month ago. The poll, conducted by the Consulta Mitofsky polling group and broadcast on the Televisa television channel, gave 35 percent to Lopez Obrador and 32 percent to Calderon.

Earlier, a poll in the Milenio newspaper gave 34.2 percent to Lopez Obrador and 31 percent to Calderon ahead of the July 2 election. Most other recent polls had put the pair in a tie.

As the date comes closer, political parties have intensified their campaigns in an attempt to attract more voters, in a country that has a particular way of living politics. Mexicans love political scandals and campaigns without them does not look attractive.

To fulfill the expectations of the public, Lopez Obrador and Felipe Calderon have engaged in a series of accusations ranging from influence peddling to money laundering, which have lead to protests from the national electoral council. This week the Federal Electoral Institute has asked political parties to ease tensions ahead of the vote, as particularly asked the incumbent president Vicente Fox to who has been accused of campaign interference, to refrain from commenting until after the Federal Electoral Institute has announced preliminary results.

As election day nears, candidates have stepped up their attacks. Federal election officials recently ordered the top two candidates to pull campaign advertising that they deemed lodged unfair accusations. One of them said that Lopez Obrador was “a risk for Mexico”. The leftist mayor replied in another aired advertising that Calderon was a “liar”.