Pyongyang is about to test an intercontinental ballistic missile which will be capable of reaching the USA. The information was revealed by spokespeople for the George Bush administration in Washington yesterday. An anonymous US official said that North Korea is planning to launch the missile next week. 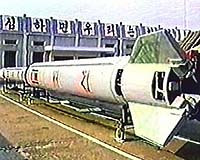 Pyongyang’s missile initiative has been a great concern for Japan as well. Japanese officials said in May of this year that North Korea was going to test the Taepodong-2 missile, the range of which may reach 6,000 kilometers, Itar-Tass reports.

In August of 1998 North Korea launched a missile that crossed over the Japanese Isles. Japan urgently asked the USA for support in the creation and the deployment of the air defense system. Washington particularly promised to invest about one billion dollars in the project to modernize the sea-based Standard-3 anti-missile system.

The commander of US troops in South Korea, Gen. B.B. Bell, said in March that there was every reason to believe that North Korea had plans to deploy new ballistic middle-range missiles. The missiles, the general added, would easily reach US objects in Okinawa and possibly Alaska.

The USA closely watches the launching pad to capture the moment when North Korea starts assembling the missile. In the event North Korea fuels the assembled Taepodong-2, the probability of the tests will increase, for it will become an inevitable step.

At the same time, Pyongyang is perfectly aware of USA’s attention and its surveillance activities from space. Therefore, North Korea may simply be bluffing. North Korean leader Kim Jong-il has an extensive experience of tricks to grasp the world’s attention when he thinks that the world ignores him. The US administration is currently concentrated on Iran’s nuclear program and the subject of North Korea has thus been pushed into the background. Kim Jong-il may simply be in dire need of attention.