The leader of the Iraqi division of international terrorist network Al-Qaeda, Abu Musab Al-Zarqawi, has been reportedly killed in Iraq. Iraqi Prime Minister Nouri al-Maliki stated at a press conference that Al-Zarqawi was killed on Thursday night in an air raid conducted by US forces. Zarqawi’s seven associates have also been killed in the strike. The operation was conducted to the north of Baghdad, eight kilometers off the town of Baqub. The prime minister did not specify any details of the operation.

Nouri Al-Maliki urged all Iraqi citizens to conduct political dialogues and avoid violence. “The authorities will act so as well, destroying all terrorists,” the minister said.

Top US General in Iraq, George Casey, stated that terrorist Al-Zarqawi had been identified on his fingerprints, DNA and visually.

US President George W. Bush confirmed the information about Al-Zarqawi’s death. Bush released a special statement in this connection, in which the US president said that the terrorist ideology had lost one of the most prominent and aggressive leaders. 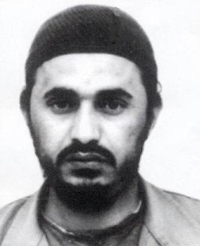 Abu Musab Al-Zarqawi
US Ambassador to Iraq Zalmay Khalilzad described the destruction of the al-Qaeda terrorist as great success. The official added, however, that violence may continue in the war-torn country anyway.

The majority of Iraqi residents hope that Al-Zarkawi’s death will put an end to terrorist acts in the country. On the other hand, many do not believe that it may bring any changes for the better. “Was it Al-Zarqawi who kidnapped 50 employees of a transport company? Was it him who would cut people’s heads off and kill tens of people every day? It was other people who committed those crimes and they will not stop. Hundreds of other Al-Zarqawis will take his place and everything will remain as it is now,” a resident of Baghdad said.

Abu Musab Al-Zarqawi, born in Jordan, was 38 years old. He was the head of the Iraqi division of al-Qaeda terrorist network that organized numerous terrorist acts in which hundreds of Iraqi civilians and US soldiers were killed. The US administration promised a $25 million reward for Al-Zarqawi’s head. This price was the same as the one set for the head of terrorist No.1 Osama bin Laden.