George W. Bush's visit to the republic of Georgia has a political motive, a signal to the Russian administration

A lot of observers regard the forthcoming visit of the US President George W. Bush to the former Soviet republic of Georgia on May 10th as “the visit of an inspector.” Mikhail Saakashvili, the President of Georgia, is believed to be the USA's protege at this point. The USA has been providing quite significant funds to the young Georgian administration after Georgia became an independent state: about $100 million a year. Furthermore, the US government assigned additional $120 million to Georgia during the recent three years for the republic's military programs. 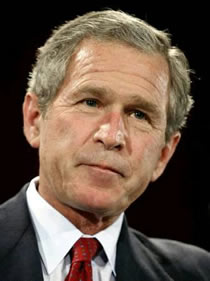 The authorities of Tbilisi, the Georgian capital, started preparing to George W. Bush's upcoming visit last week. Huge billboards saying “Welcome, President George Bush” appeared on city's major highways. The billboards depict Georgian and American flags with the inscription in the Georgian language: “President Bush will deliver speech on the Square of Freedom on May 10th at 9 a.m.”

According to the information from specially-established headquarters for the organization of US president's visit to Georgia, there will be about 100 street signs erected in Tbilisi and other cities of the republic. The cost of each sign is evaluated at about $220. Thousands of Georgian schoolchildren with Georgian and American flags in their hands will be welcoming George Bush on his way from the airport. The city authorities are currently taking urgent measures to improve the outward appearance of the city, repairing roads and painting buildings in all colors of the rainbow. The buildings in the center of Tbilisi are still in scaffolding. President Mikhail Saakashvili personally controls the preparations to the visit of the American guest. Municipal services are repairing the building of the parliament as well, on which they assigned $45 thousand.

Practically all analysts believe that George W. Bush's visit to the republic of Georgia has a political motive, a signal to the Russian administration. The Georgian government apparently wants their Russian colleagues to understand that Georgia is not going to stay alone with Russia.

Shalva Natelashvili, the leader of the opposition Labor Party in Georgia, said that the opposition was going to organize a meeting of protest during Mr. Bush's visit to the republic, protesting against the dictatorship of the Georgian President Saakashvili. The head of the Georgian Internal Affairs Ministry stated in return that all unauthorized rallies would be subdued.

The new Georgian administration is trying to improve its tense relations with Russia. The President of Georgia, Mikhail Saakashvili, has recently stated that Georgia was ready to remove the visa entry for Russian citizens. According to Saakashvili, it will become one of the key issues in the talks with Russian officials. It is noteworthy that Georgia has recently canceled the visa-entry order for US, Canadian, Japanese, Israeli and European citizens, most likely for tourist reasons.