During her four-nation Latin American tour, US State Secretary, Condoleezza Rice, made clear Washington's intention to undermine Venezuela's leftist rule by isolating the country from its strategic neighbours. Ms. Rice already visited Brazil and Colombia and is expected to travel to Chile and El Salvador to focus on regional issues, but according to her statements, Hugo Chavez, has became White House main concern in the region. 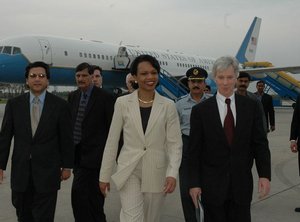 Washington's policy for South America becomes clear: to sweet Brazil's ears recognizing the South American giant as an hegemonic power in the region and increasing support to conservative Colombia in an attempt to isolate Hugo Chavez in Venezuela. "Brazil is a regional power and, in fact, Brazil is a growing global presence, and we think that is a good thing," Rice said hours before she was due to meet with President Luiz Inacio Lula da Silva.

As Brazil holds an independent foreign line, Ms. Rice tries to secure at least a willingful neutrality from the portuguese speaking South Americans while increasing support to hardliners in Colombia's long running internal conflict. Soon after leaving Brasilia, Rice has told Colombia that Washington will go on supporting its fight against drug traffickers and left-wing insurgency.

Colombia's conservative leader Alvaro Uribe welcomed US support as keeps on his efforts to seal a definitive agreement with far-right paramilitary groups despite human rights objections. In return, Ms Rice praised the Colombian authorities for winning back large areas of land from left-wing rebels.

But Venezuela's President Hugo Chavez brushed off the comments saying: "Perhaps a pawn tells the queen what she wants to hear to make her laugh. Enough of Colombia keep acting like the pawn of the empire!"

With Colombia and Venezuela in a virtual political and military draw, Brazil's position will be crutial for the future stability of the northern region of South America. It will be in Lula's hands either to follow chimerical imperial ambitions in Latin America and worldwide (Brasilia pursues a permanent seat at UN Security Council) or to committ himself to a more realistic and cooperative policy side by side with regional allies.

For tactical reasons, Rice and the other Washington hawks will be happy if Lula takes the first way, but the unstable situation in today's Latin America is not the adequate for Napoleonic adventures.

On the photo: US State Secretary Condoleezza Rice at her arrival in Bogota, Colombia