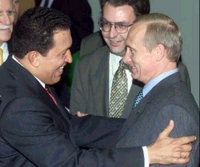 Venezuelan President Hugo Chavez personally took delivery of a first shipment of 30,000 AK-103 Russian rifles in Caracas on Sunday as made public his intentions to buy Russian-made Sukhoi Su-35 fighters to replace American aircrafts. Chavez made clear that the new weaponry was only to defend the country from any foreign attack as ruled out any aggressive intentions against Venezuela’s neighbours.

"Venezuela is not going to attack anyone, but I repeat that no one should make any mistakes. We are going to defend this country with everything we have," Chavez said on his weekly television and radio show. Chavez said 30,000 Kalashnikov AK-103s had arrived on Saturday, the first shipment of more than 100,000 rifles.

"I'm going to tell you something in advance. It's very probable...that on July 5 Sukhoi planes will be crossing the skies of Caracas," Chavez said on the show. With these words, the Venezuelan leader confirmed the negotiations between Caracas and Moscow over the acquisition of Russian-made Sukhoi Su-35 fighters to replace the F-16s, which Venezuela had trouble maintaining because of the U.S. ban on parts export for upgrades.

It is also worth to mention that Venezuela can no longer renew its weaponry with US materials, as Washington has self-imposed a ban to deliver arms to the South American country.

Defense Minister Orlando Maniglia appeared on the Chavez weekly show, in a live broadcast from the port of Puerto Cabello, showing containers packed with weapons sent by Russian firm Ros Boronexport. Venezuela had paid 400 million U.S. dollars for the guns, which would be used for defending its borders, Maniglia said.

Washington and Colombia, the Venezuelan neighbour, have risen concerns over the intentions of Caracas. The US State Department believes Chavez is aiding leftist insurgents in Colombia, but Venezuela has repeatedly denied allegations.