The strangest and most shocking Asian city, Beijing, combines all civilizations in one

A first-time visitor to China may be under the impression that things look complex and simple at the same time in that wonderful country. The street cartoons can not but remind me of the Soviet-era street propaganda. So who is painted as an object of ridicule in one of the world’s most dynamic economies? One of the caricatures features a young man and a girl sitting on a bench in the park. The young people are hugging and smooching. A mom at a nearby bench is apparently aghast witnessing an act of lewdness. She covers her son’s eyes with her hand so that he can not see shameful conduct. A couple of pensioners is seen fleeing the scene, indignation flushes their faces. The message of the cartoon is obvious: Billing and cooing in public is bad. And they do not kiss nor hug in Beijing. At least I have not seen any kissing or hugging in the streets of Beijing. Do chasteness and decency rule China? 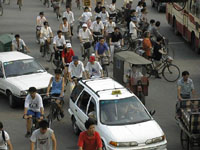 The strangest and most shocking Asian city, Beijing, combines all civilizations in one

There are lots of newsstands in Beijing. They are rife with newspapers and magazines. The number of publications has risen tenfold over the last few years. But you will never find any newspapers or magazines with anything erotic on or under the cover. Not to mention pornography. To some extent, the attitude is quite understandable. The demographic problem in China is completely opposite to that in Russia. The number of the Chinese can defy one’s imagination, it already totals 1,300,000,000, around ten times as much as the population of Russia. Therefore, the government pursues a one-child policy i.e. a family is recommended to have one child only. A second child entails a sum of money payable to the state. The Chinese call it a “fine.” The amount of a fine is quite substantial, it currently stands at $1,200. A family is to pay the same fine for every newborn. The law does not apply to residents of the countryside if the first offspring is a girl. The girls are counted out, so to speak.

“Can you show me the way to the nearest McDonald’s?” – I put this question to a number Chinese on the Beijing streets. I really wanted to eat something else after living on a diet of sour pork stew with raspberry preserves, fried sparrows in spicy soybean sauce and other local delicacies. Alas, no one could help me out with the directions. A policeman just shrugged his shoulders. The passer-bys seemed to take a few simple words in English as gibberish. We took a guess and soon saw a McDonald’s outlet around the corner. By the way, there is plenty of similar fast-food restaurants in the center of Beijing. However, ordering a burger was an ordeal. I tried my most simple English but all to no avail. Finally, the great linguistic Wall of China was broken after pointed at the picture of Big Mac hanging above the cash register. At the same time, China has the biggest number of employees working in scientific and engineering. China also holds the world record as to the number of students – 20 million.

Street vendors who sell souvenirs, sunglasses, beads and stuff on the beach of a tropical resort on the island of Hainang speak much more passable English and even Russian. More Chinese tourists have been going on vacation on the resort in recent years. Hordes of them arrive by a charter flight several times a day. Hundreds of Chinese holidaymakers fill the beaches. Almost all of them bring the life rings: good swimmers are still far and between. Female sunbathers do not wear bikinis here. The most typical swimwear includes a kind of skirt.

On the face of it, things look pretty simple here. There is only one time zone in China. The exchange rate of national currency, the yuan, is the same across the country. It currently stands at about eight yuan for one American dollar.

Bicycle is still the main means of transport. Every daynine millioncyclists roll about the capital of the People’s Republic of China. Soaring gasoline prices mean nothing to an average Chinese. Bicycle is a specimen of people’s democracy in action. Hit the pedals and forget inflation, year in and year out, rain or shine. Use a light plastic raincoat folded under the saddle in case of rain. Every time it starts raining, the streets are lit with yellow, purple and red figures riding over the puddles.

Bicycle is a cool way of going around Beijing. You can see dozens of bicycles parked near most luxurious office buildings. The Chinese cyclists are really something. One day I saw a man riding his two-wheel machine with a heap of foodstuffs strapped to the carrier. His little son sat on the frame. The man was looking through a newspaper while talking on his cell phone. He seemed to be getting pleasure out of the bumpy ride along a busy highway despite all the maneuvering and exhaust fumes.

Congestion on the major roads is becoming a serious problem in Beijing. Traffic jams occur on a regular basis, though those jams are not so spontaneous and dull as they are in Moscow. In terms of car sales, China is the world’s second biggest consumer. Walking through the center of the city, you can see lots of familiar car dealerships.

Beijing is a shock. Is it still Asia or somewhere else? Where is the old city? The avenues are wide and long, and skyscrapers look taller than anyof those in Moscow. A network of paid highways keeps growing. The slums are demolished by entire blocks. However, some things never change under the brand-new neon signs and ultramodern compounds. Rickshaws are wheeling, peddlers are persistently trying to sell you fried snakes, cockroaches, and frogs’ legs. And crowds on the streets are about to become a real problem for Beijing.

A special lifestyle is born of overpopulation. Everybody talks too loud because they want to be heard in a crowd. Shop owners use megaphones for advertising all sort of merchandise from dawn till dusk. You can imagine pandemonium.

Exactly 40 years ago in May, Chairman Mao launched the Great Proletarian Cultural Revolution. But the Chinese media keeps silent about the anniversary, my guide follows suit. I raise the issue myself.

“What is the attitude to Mao Zedong these days?”

My guide takes a pause to choose the words in a most careful way.

“It is believed that Chairman Mao’s deeds were 30% wrong, and 70% right,” is the only reply that I get from him.

Are the events of the past slipping into oblivion?

The mausoleum holding the body of the Great Helmsman is located in Tiananmen Square. Scores of people are milling around the mausoleum. They are eager to step inside and take a look at Chairman Mao. Many are carrying flags and Mao’s portraits. Several soldiers watch over the crowd, they are positioned on special platforms.

For unknown reason, there is a fire extinguisher sitting at the foot level of every soldier. Plainclothes security agents give orders to the noisy crowd. They shape it into a line, four people abreast. Men, women, and children are told to keep the distance and proceed in due time. Some people are asked to step out and produce their IDs.

Kiosks sell souvenirs inside one of the mausoleum’s halls. The image of Mao graces photographs, quotation books, watches, medallions, key holders, lapel pins. Merchandise is sold by the piece or by the set. A picture of Mao wearing his trademark military cap and jacket, his hand outstretched waiving to the masses. The price tag reads: “The souvenir of Chairman Mao. Mausoleum.” It cost 15 yuan apiece.