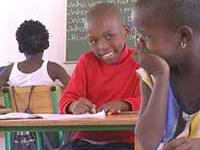 The Organization of African Unity chose the day of its constitution, 25th May (1963) as Africa Day, for the world to celebrate with and remember Africans, measuring the progress of this continent in the international community.

Today, in 2006, we can be more confident of a positive outcome in the near future than one year ago, before Gleneagles brought Africa into the international spotlight, analysing whether the criteria to reach the Millennium Development Goals would be met and suggesting policies which might bring solutions.

Although not all of the promises have been met, in general terms Gleneagles was successful because it showed Africa that the G8 countries care and it brought Africa into the G8 agenda – it is a theme which will be highlighted during this year at G8 events in Russia, a country whose commitment to Africa is translated into a growing share of bilateral and peaceful interests and initiatives.

While the international media continues to concentrate on gloom and doom stories – disease, disasters and human despair – the reality on the ground is different, and fortunately, dynamic. Partnerships are forged daily through NEPAD – the New Partnership for Africa’s Development, an instrument of the African Union which bases business relationships on bilateral agreements in an atmosphere of transparency, accountability and good governance.

The recent summit on education proves that Africa’s leaders are committed towards pooling resources and establishing benchmarks to measure progress, while literacy rates continue to rise, while school attendance levels improve. Education, the tool which shapes the future, is the foundation of a brighter tomorrow for Africa and its peoples.

Debt relief, in focus at Gleneagles, is now a reality for many African countries, which find that the resources freed can be applied to social and development programmes, instead of swelling the coffers of already bloated international financial institutions which issued credit under special conditions to corrupt or corrupted leaders in different times, saddling the citizens of today with an unacceptable burden.

To name but one example, Nigeria received 34 bn. USD in credit over 20 years since 1985, during which time it repaid 35 bn. USD and continued to owe 36 bn. USD. With the new approach being adopted by the Paris Club and under the HIPC initiative, cancelling or rescheduling debt based on achieving pre-established goals and by injecting cash directly into national budgets, the international community and Africa can play together on a more level playing field and through teamwork, can forge a relationship which welcomes Africa into the fold, rather than deriding it as some sort of pariah.

It must be remembered that many of Africa’s problems were caused by the instability arising from colonialist and imperialist policies which created a one-way for Africa’s resources – outwards and away from the Africans. Less than half a century after independence, Africa can celebrate this Africa Day aware of the fact that in two generations, most African nations overcame the problems it took some European nations two thousand years to address.