The Ecuadorean Congress ratified late on Sunday President Lucio Gutierrez's decision to dissolve National Supreme Court of Justice, as street marches demanding a mass resignation of all country's politicians continued on Monday. Despite protests in the Capital, Quito, Mr. Gutierrez said he won't resign and tried to minimize marches saying they represent “only one percent of city's population.” 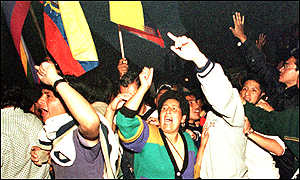 Gutierrez dissolved the court Friday to try to placate protests after his congressional allies in December fired 27 of the court's 31 judges and named replacements sympathetic to his government. The controversial pro-Gutierrez court voted to release former President Abdala Bucaram from his corruption charges allowing him to return to Ecuador.

Bucaram is widely hated by Ecuadoreans who see him as the main responsible for country's suffering. Since Gutierrez's court favoured former President, the opposition tied Bucaram to Gutierrez and began demanding President's resignation.

After dissolving the Supreme Court, Gutierrez declared the State of Emergency in Quito, but the population filled the street in ope disobedience to their President. The crowd demandes all over the weekend, and also on Monday, President's resignation.

The military, which under the state of emergency was charged with maintaining public order, was not visible on the streets Saturday as thousands of people disobeyed the decree and staged a peaceful demonstration, punctuated by the honking horns and shouts of "Lucio Out!" and "Democracy yes, dictatorship, no!"

No serious incidents were reported, but small clashes took place when the police fired tear gas to a crowd in Quito. The gas affected children and older people protesting against Gutierrez.

In a meeting with reporters at the Government Palace Sunday night, Gutierrez vowed that he would not give up his post and downplayed the daily street protests that began Wednesday in the capital. He said he recognized that the growing street marches showed there is "discontent in part of the population of Quito." But he said the people participating represented only a small portion of the capital's inhabitants.

"We have more than 2 million inhabitants and I think that the marches have not exceeded 10,000, 20,000 people," he said. "We could say that 1 percent of the people are actively participating." On Monday, Gutierrez thanked the Congress for supporting the President of the Republic.

On the photo: Protesters in Quito filled the streets to demand President's resignation